And Baby Makes Six (Midlife Baby on Board) 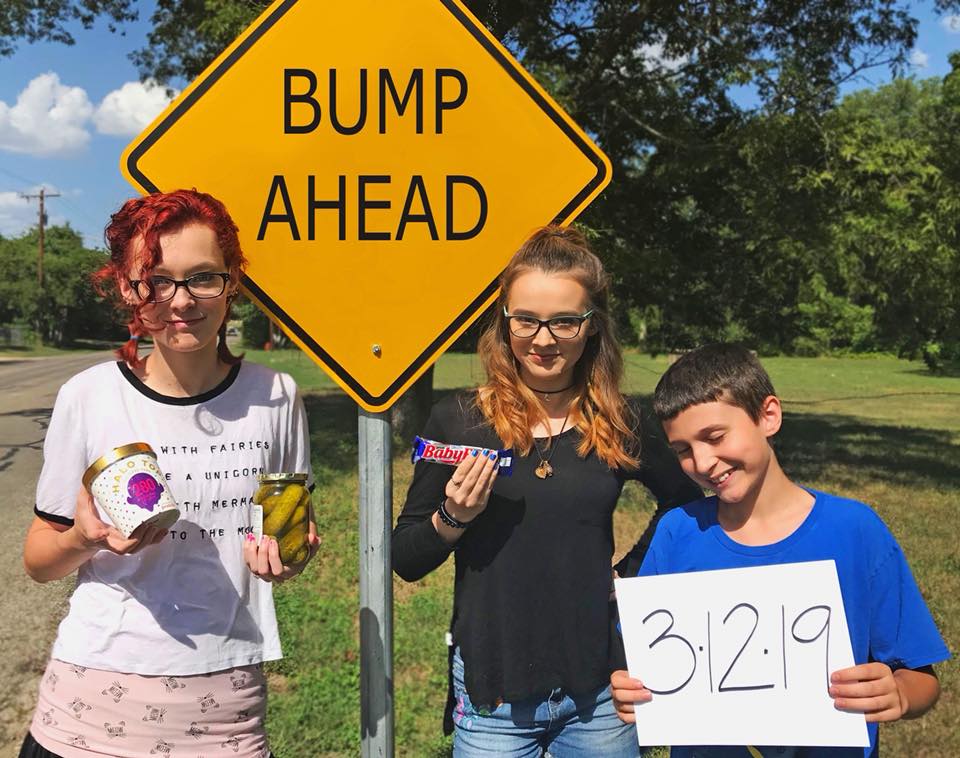 Do not adjust your computer monitor, your eyes are not playing tricks on you. . .

Yes, people, we are indeed expecting another addition to the Oliver family next spring, God willing! Sometime next March our #MidlifeBaby will arrive and we will be starting the parenting journey all over again.

Just in case you need a review of the facts:

So last Tuesday I had some errands to run and I made a quick dash into Dollar General for a few items. As I paid I nonchalantly asked the cashier for “one of those $1 pregnancy tests” behind the counter. It isn’t the first time in the past 12 years that I’ve made the request, though in the past I was 99% certain I was not actually pregnant, only irregular and late, and I just wanted to spend the $1 for peace of mind of knowing one way or the other.

However, this time was different. This time I was only 1 day “late,” which means nothing when you’re irregular anyway, and I’d been feeling pregnant for over two weeks. . .

Still, as I got home with the box and readied to take the test, I expected it to pop up negative. I’m almost 40. I should be much less fertile. It should be much more difficult to conceive at my age. And basically,. . . I’m old. =p

So imagine my reaction when the test not only came back positive but popped up so bright and dark and fast that it practically yelled at me, “You’re having a baby!!!”

I immediately texted my husband, and he asked if I took a second one. (I’m sure he was in shock, too!) I didn’t even BUY a second one. I only bought the one! So back to town I went, to the pharmacy, to buy a name brand test — which also came back immediately positive.

So how are we feeling about our little midlife baby?

After getting over our initial shock, we are feeling pretty excited. Children are always a blessing. Two of our three were surprises, only one was planned. This isn’t the first time God had other ideas for us than what we planned or expected. But we were blessed by all three of our kids and we will be blessed by this one, too!

My husband couldn’t wait to tell the kids, and we told them about 20 minutes later. Besides being a little shocked, they are happy. (I think my son was a little grossed out, actually, because we were doing THAT?!. . .But I think he’s recovered now.) My husband couldn’t wait to tell our moms either, and his brothers, and like, all the rest of the family members. I guess he’s excited. =)

Two days after we took our home tests, I went to a walk-in lab and got an official pregnancy test — it will take a little while to get into an OB, especially since I have to find one. =p Even though home pregnancy tests are incredibly accurate these days, moms and grandmas still want that doctor visit.

The walk-in lab confirmed, we are definitely expecting. And according to our little app, we are six weeks along now, and due around March 12th.

But you know, there are so many bright sides to having a baby now. I mean, this time we got to do a fun Facebook announcement. 😉 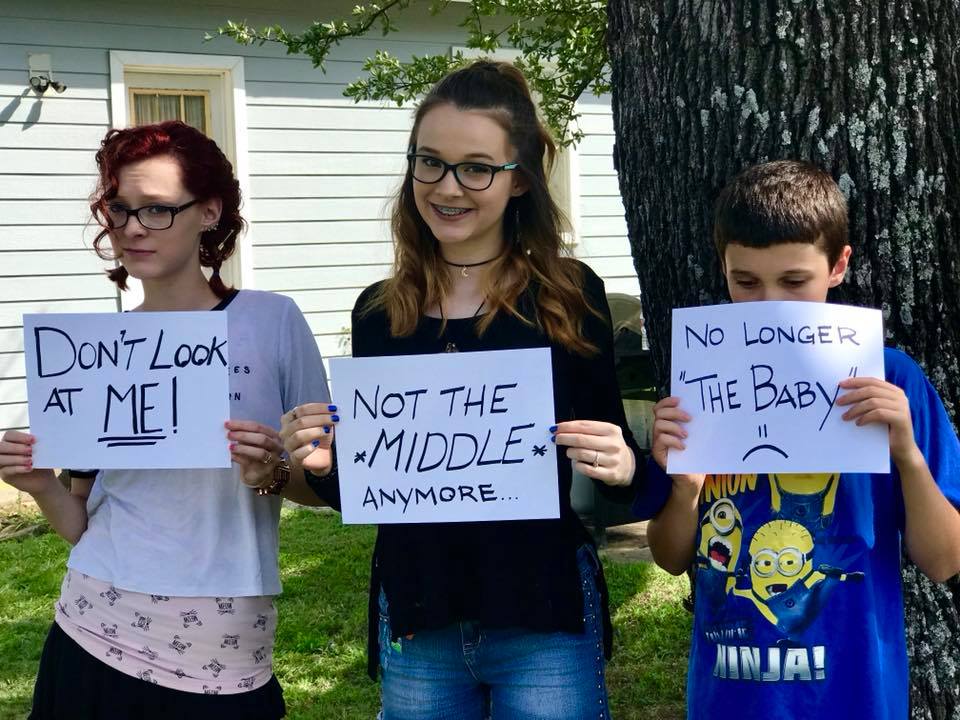 Seriously, there ARE a lot of benefits though.

And also, it’s ever-so-slightly daunting to think that we are starting over again–not only with sleepless nights, potty-training, and terrible twos, but also with homeschooling, reading, and writing. It has occurred to me that this midlife baby will be homeschooling alone, whereas our other three always had each other.

Things will be different this time! Not better or worse necessarily but definitely different than anything we have done before!

So that’s where we are! We are excited, surprised, a little nervous, and praying for a healthy baby and healthy pregnancy. I have no doubt that God will take care of us and provide for all the details. He provided everything we needed for our other three, and He will take care of us again. 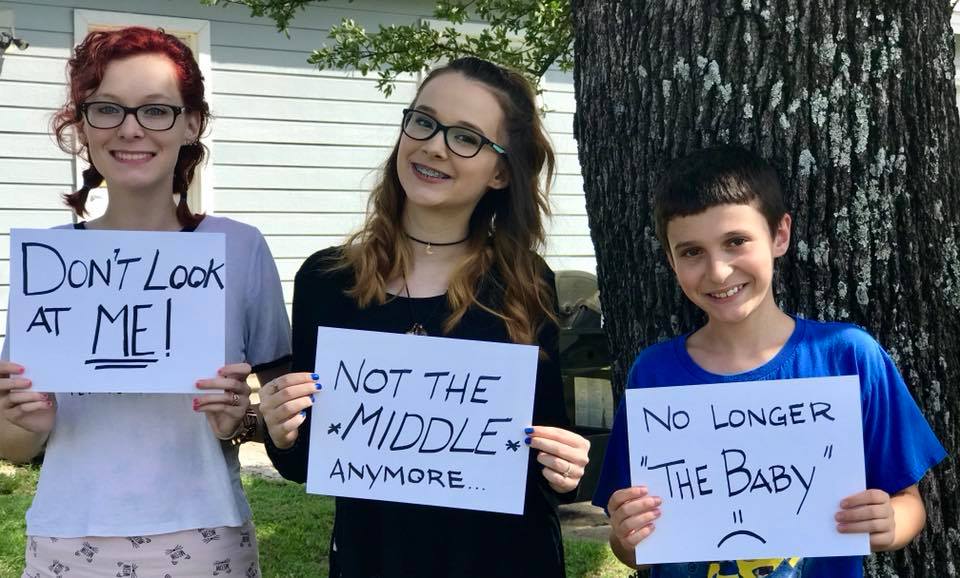 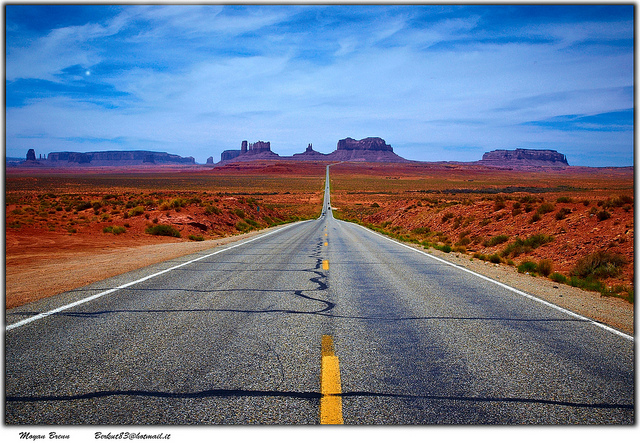 By the way, my sister was born when my mom was 40 and my brother’s wife had their first baby at age 40 last year. 40 sounds like a good age. 🙂

Many blessings! I have 5….. 11, 12, 19,22 & 27 . I had 2 babies back to back ( in the usual way lol) at almost 40. Babies are always a blessing. Take care of yourself , God will take care of the rest according to His plan. Enjoy every moment, even the morning sickness ones if they happen. It means God has blessed you with hormones to support that pregnancy! I really love that your 3 kids joined in the photo op announcement and just love the pics they took. The oldest “ don’t look at me” moment Lolol.… Read more »

Congratulations! ! So exciting 🙂 My sweet friend had a surprise #4 at 47! Her youngest was 12 I believe. I hope things go smoothly and that you have a healthy pregnancy.