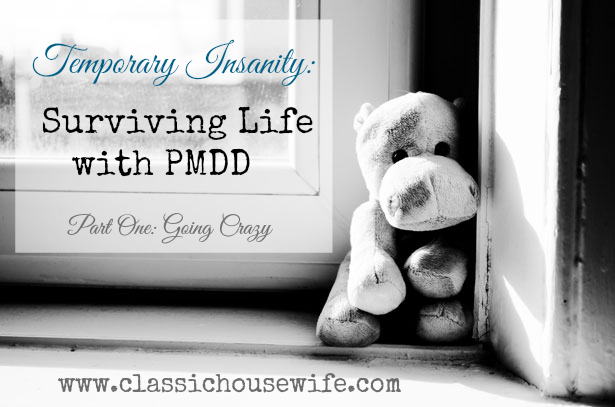 After the birth of my third child, my son, everything changed.

Growing up, I didn’t suffer much from PMS, not really. I was sensitive and weepy, yes, like most teen girls. But I never had anyone look at me like I had two heads and or like they needed to fear for their safety–no, that came later.

My biggest teenage PMS challenge was the irregularity, and the cramps. Never knowing when they would hit, but knowing with certainty that about every six weeks I was going to end up incapacitated, nauseous, vomiting, taking codeine to help the the pain pass, or shaking and sleeping through it if my prescription wasn’t with me.  The doctor offered to put me on the pill to regulate my hormones, but we didn’t. I chose to live with the uncertainty and the three hours of torture, because once that initial onslaught passed I was pain free for another six weeks.

It wasn’t until I married in 1998 that I went on birth control, because that was the thing to do, and yes, that did help in a world of ways. Regularity, obviously, but also no more debilitating cramps, no more codeine, no more misery. And nothing more than your typical emotional PMS symptoms, either. That was my normal for a few years, until shortly before we began trying to conceive our second child. I had gone through a depression the previous fall while my husband was out of work, and I wanted to be “medicine free.” I weaned off the Effexor, and then I went off the BC pills, too. I mention this to say, that I know what depression feels like, and also, that ever since then I have definitely felt more susceptible to depressed moods, but they are moods and they don’t usually last.

Emotionally, I was okay. Until my third child. And then everything went wonky.

I’m not blaming my child! I’m not saying that if you have three kids this will happen to you, either. But we all know that pregnancy DOES THINGS to your body. Clearly, I came out of this pregnancy emotionally affected by the work it takes to make a baby. My hormones were out of whack. For the entire first year I felt overwhelmed, easily depressed, incapable, emotionally unstable and irritable — in short, I felt crazy. I could look at myself from the outside in and see that I was irrational and yet I felt helpless to change that.

– There were days that I would cancel commitments or plans with friends because I simply couldn’t mentally cope with the effort it would take to get everyone ready and out of the house.

– There were days that I mentally checked out and just went through the motions to make sure the kids got fed and didn’t get into any danger while I shoved the house and the laundry everything else out of my mind.

– There were days that I felt unstable so I would pack the kids up and head to a friend’s house to let them all play in her back yard while I sat in the quiet house and talked with her to find my bearings.

– There were days when my husband looked at me as if I had gone completely nutz.

For eight years there were conversations with doctors, conversation with friends who had similar experiences, much prayer and Bible study, counseling, and so on. Eight years of riding the PMDD roller coaster. But I wouldn’t know what to call it until six year later.

.. I decided to break this story into three parts, otherwise it might get too long to read through. Next time I’ll share how we arrived at our diagnosis. Why am I sharing this? Because I’m not the only one. Maybe you have been trying to survive life with PMDD, too. Maybe it’s someone you know. Here and there I have “blogged in passing” about having bad days, or feeling overwhelmed, but I have never put it all in context and shared my journey. I want to encourage you and say you are not alone; you are not crazy.

You can find Part Two here.

Catchy title! 😉
I’m glad you’re blogging about this. It’s a huge part of life for a lot of us, but has been a taboo subject, which can make us feel isolated. Be strong, sisters! The PMDD craziness isn’t the real you!

Amber, I’m very sorry you’ve battled this. I didn’t have as much compassion for sufferers of hormonal problems until I started having problems when I turned 40. It’s a real challenge. Looking forward to reading the rest of your story.

Another hand raised in the “I have been there!” camp. Looking forward to reading and sharing your upcoming posts.