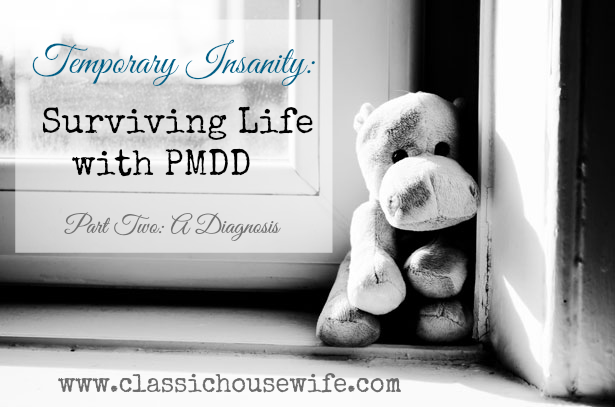 Yes, that third pregnancy sent “normal” completely out the window.  I used to watch those commercials that would come on for “that new diagnosis called PMDD,” and outwardly I’d scoff, “here we go with another label to throw prescription drugs at,” and inwardly I’d say, “THAT SOUNDS JUST LIKE ME.” I thought it was in my head and I denied it.

If you read Part One, you know that I went from a person who had experienced fairly normal PMS symptoms up to that point, to someone who felt rather unstable most of the time. Did I have postpartum depression? I don’t know. Maybe. But that certainly wasn’t the only problem because it didn’t go away. It hung around.

After the first year or so, my body began to settle into a new normal. A normal in which “normal” happened about one week a month.

As my body returned to a normal monthly cycle after nursing my son for 8 months, an emotional pattern emerged that clearly followed my cycle. I would have one good week, one BAD week, one REALLY bad week, one kinda bad week, and repeat – emotionally and mentally speaking. I felt like I was “PMSing” (irritable, cranky, strong mood swings, overwhelmed) most of the time.

Oh, I was pretty great about hiding it out in public. If I was too overwhelmed I would simply not go out. If I did get out, being around friends actually really did help lift my mood a while, because as a true extrovert I am energized and encouraged by fellowship with others- it’s a natural mood stimulant. And even if that didn’t help, I could put on a smile and survive until I got home. If I made it out of the house. So often, trying to get everything together and get out the door was so overwhelming, I would give up. I cancelled plans a lot.

Does this sound like depression?  It does, doesn’t it! In a lot of ways, for a lot of women, PMDD manifests itself with symptoms that are very similar. But depression doesn’t cycle. PMDD is related to the changes in hormones throughout the woman’s cycle, triggering PMDD symptoms in the second half of the menstrual cycle. I would experience other symptoms, too, such as a severe migraine right before the onset of menstruation, every single month, and trouble sleeping.

PMDD symptoms can include: fatigue, mood changes, abdominal bloating, breast tenderness, headache, irritability, depression, increased appetite, acne, oversensitivity to environmental stimuli, hot flashes, heart palpitations, easy crying, difficulty concentrating, dizziness, sleeplessness, forgetfulness, and gastrointestinal (stomach, bowel) upset. (Cited from this medical source; I’ve highlighted the symptoms that I would experience. You can see how PMDD is like PMS just went crazy, married depression, and had lots of crazy little symptom-babies. I felt like I was either nuts, or hitting early menopause, one or the other.)

From about 2006 to 2010, THAT was my new normal. Over time, I began to become irregular again as well, and I was tired of the emotional roller coaster, so at the end of 2010, I finally decided to go to the doctor.

Unfortunately, my doctor didn’t seem to want to seem to give a lot of interest to my case. Giving the “diagnosis” that, well, I am getting older (I was 32!!) my doctor didn’t actually give me any diagnosis or input at all. He dismissed my questions about irregularity and mood swings and then he asked me, “So, do you want to go on the pill?” I was disappointed with his response, but I agreed, hoping it would help, and in a way, it did.

When I returned the following year, I told my doctor that the birth control pills were helping SOME. I was more stable during the weeks that I took the pill, but during the false week–my husband would look at me like I was the wicked witch of the west, and I felt out of control. I felt like I needed something more than the pill, or maybe something else. Herbal supplements, or progesterone cream or SOMETHING. Again, he was dismissive and said, “Well, if the pill’s helping we’ll stick with that.” I left in tears because the pill WASN’T helping – not really.

I didn’t go back.

For a whole year, I kept filling that prescription and taking those pills. I took them because they did help some, and I kept intending to find another doctor and dig into this further. I didn’t. When that prescription ran out, I had to. I had put it off long enough. At the end of 2012, I finally went in to a new doctor, and this time, SHE LISTENED. I told her about the 5 years of life without the pill and two years of life on the pill. And you know what? She looked at me and said, “This is textbook PMDD.”

She had an answer!! And she said that typical cycling pills make it worse because they increase in dose each week and then drop suddenly, sending me spiraling deep into PMDD. I was so relieved to have a diagnosis. She also said there are two main methods of treatment: one involves anti-depressants, and the other is taking the same dose of birth control pill every day. Every. Day. I didn’t want to do either of those, but after researching both, I agree to take the every day pill. Initially, that helped. THAT REALLY HELPED.

Yes, normal included good days and bad days, sad days and happy days. But I no longer felt out of control, riding the emotional tilt-a-whirl, and that felt so good. So, so, good.

Unfortunately, that didn’t last forever. And the events of the past six months have led me down a completely different path, again. A path without the pill, thankfully. That’s going to have to wait for Part Three.

Next time I’ll share the events that led my husband and I to decide to forego treating my PMDD with the “every day pill” and what I’m doing now. I will also share more information about PMDD and PMDD treatment. Why am I sharing this? Because I’m not the only one. Maybe you have been trying to survive life with PMDD, too. Maybe it’s someone you know. Here and there I have “blogged in passing” about having bad days, or feeling overwhelmed, but I have never put it all in context and shared my journey. I want to encourage you and say you are not alone; you are not crazy. 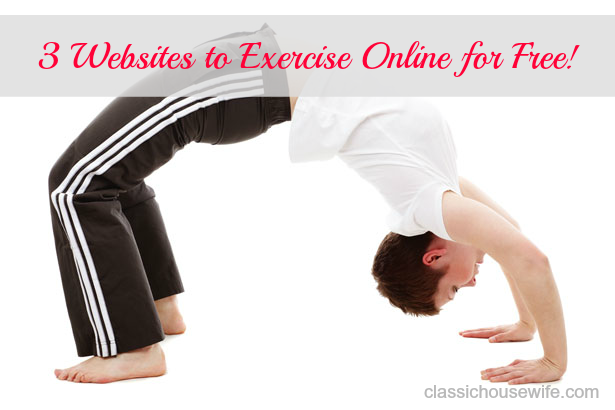 Well, this post hit me right in the face. This is me! I have been taking the pill every day without a break for years because coming off it sends me completely off my head. I had no idea it was a recognised problem – I figured it was just part of my general faulty-wiring problems. I didn’t even consider that it might be the CAUSE of the faulty-wiring problems! Thank you for writing this series of posts! I’m now very much looking forward to hearing how you deal with it without the pill, because I’ve been worried for a… Read more »

Your post was so refreshing to read and I am so glad that you are bringing this awareness to other moms who are struggling with the same thing! I too deal with PMDD and it took me several years to get some answers and some relief. I would suffer from every. single. symptom. listed on that chart. I also have PCOS and went through the painful loss of 5 babies so I knew that my hormones were not balance. During that time I discovered i have a rare gene called the Factor IV Lieden gene which increases risk for blood… Read more »

Your blog has been so informative. Please share the third part as i am anxious to see how you’ve treated your PMDD. I am currently on supplements a d testosterone but am still experiencing erratic mood swings and intense depression. Thanks

Camile, I’ll make time for it very soon. I’m not sure I’m going to be able to help much, because one thing I’ve learned through my research is that everybody is different – something works for one person and not another, and vice versa. It makes it more difficult. It’s frustrating, I know. =(

I, too, have been living with PMDD, and I believe it started when I began menstruating at 13 (I’m now 39). My mom also had it and I definitely think it’s hereditary. Up until 2 years ago when I got sober, I self-medicated with alcohol and other drugs. The alcohol made me feel better temporarily but made things much worse in the long run. I am constantly trying things to help me feel better but nothing works 100% of the time. I’ve started eliminating gluten from my diet as much as possible lately because I’ve read numerous articles about how… Read more »