As a kid I hated spinach.

Oh, no, it’s true. I really truly despised the slimy green mass of goo on my plate. In my defense, it was pretty much always overcooked and mushy, and rarely ever served fresh.

As an adult I love spinach. Fresh baby spinach, slightly steamed or cooked spinach in savory dishes. YUM. And from what I’ve been reading we actually need to be eating a little bit of both (raw and cooked — but never OVER cooked for the sake of your taste buds!) because our body can better digest some of this super food’s nutrients when it’s raw, and others (like iron) when it’s cooked. And actually, it’s not only your tongue that’s at risk if you boil it to death, you’ll also cook out all of those wonderful nutrients, making Super Spinach not so super anymore.

And I’ve known this for a while – the awesome amazingness of spinach that is – and I’ve also known that I’m borderline anemic for, well, basic forever.. but I’ve only recently started making a point to get more of it in my diet. (I guess I’m pretty hard headed sometimes!) 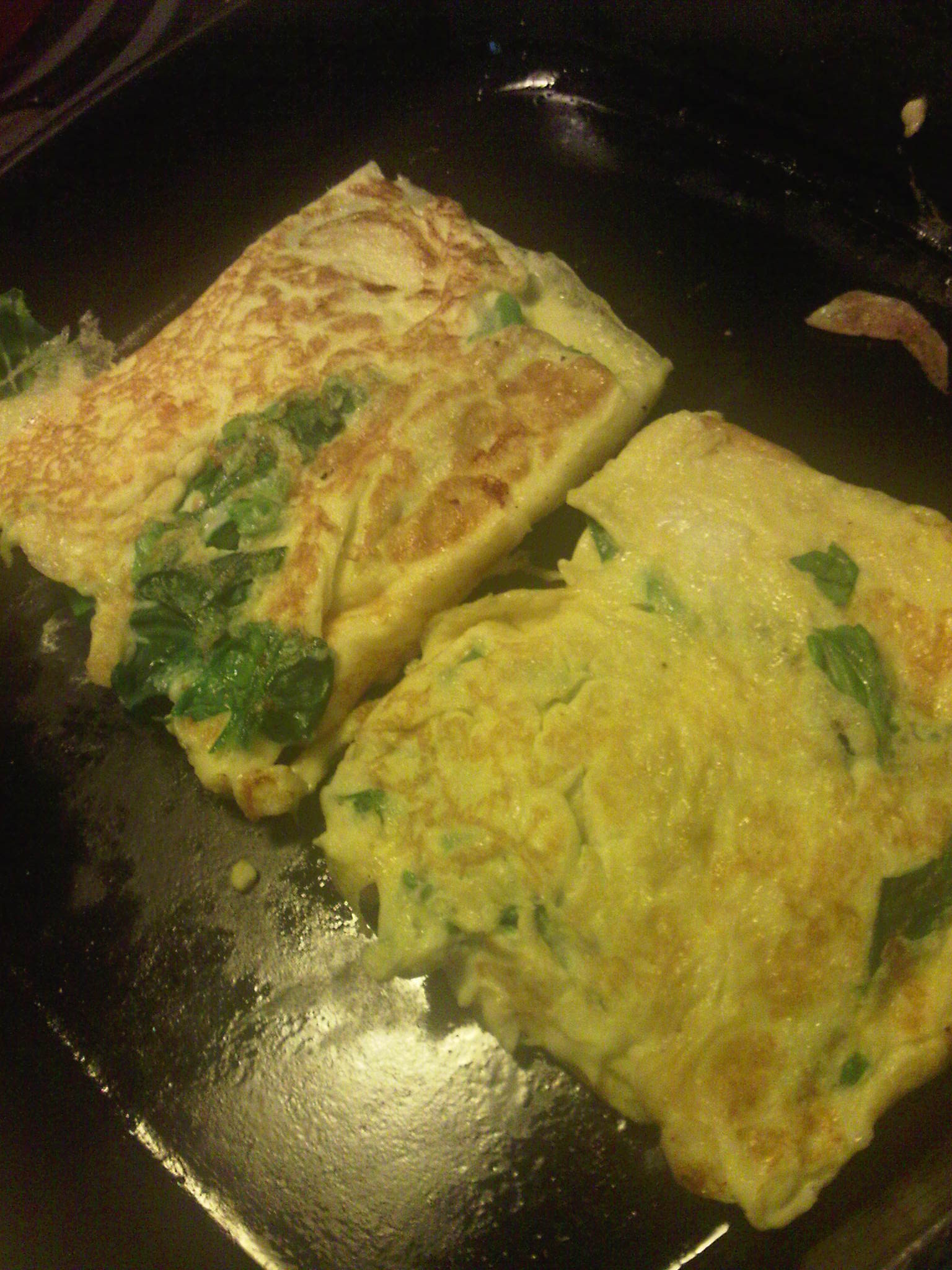 I have two favorite ways that I’ve been adding spinach to my diet lately and they are too good not to share! The first one is not too weird, I don’t think. It’s a yummy, delicious, cheesy omelet. MMMMMmmmmm. I simply scramble my eggs with some mozzarella and spinach and cook it in a large skillet folding it into a square as it cooks. I don’t know if that’s technically an “omelet” or not (I’m not much of a chef) but what I CAN tell you is that it’s delicious. Especially when it’s served on some toasted and buttered Genesis or Ezekiel bread (which by the way, containing both beans and nuts/seeds counts as not only a whole grain but also a complete protein!) 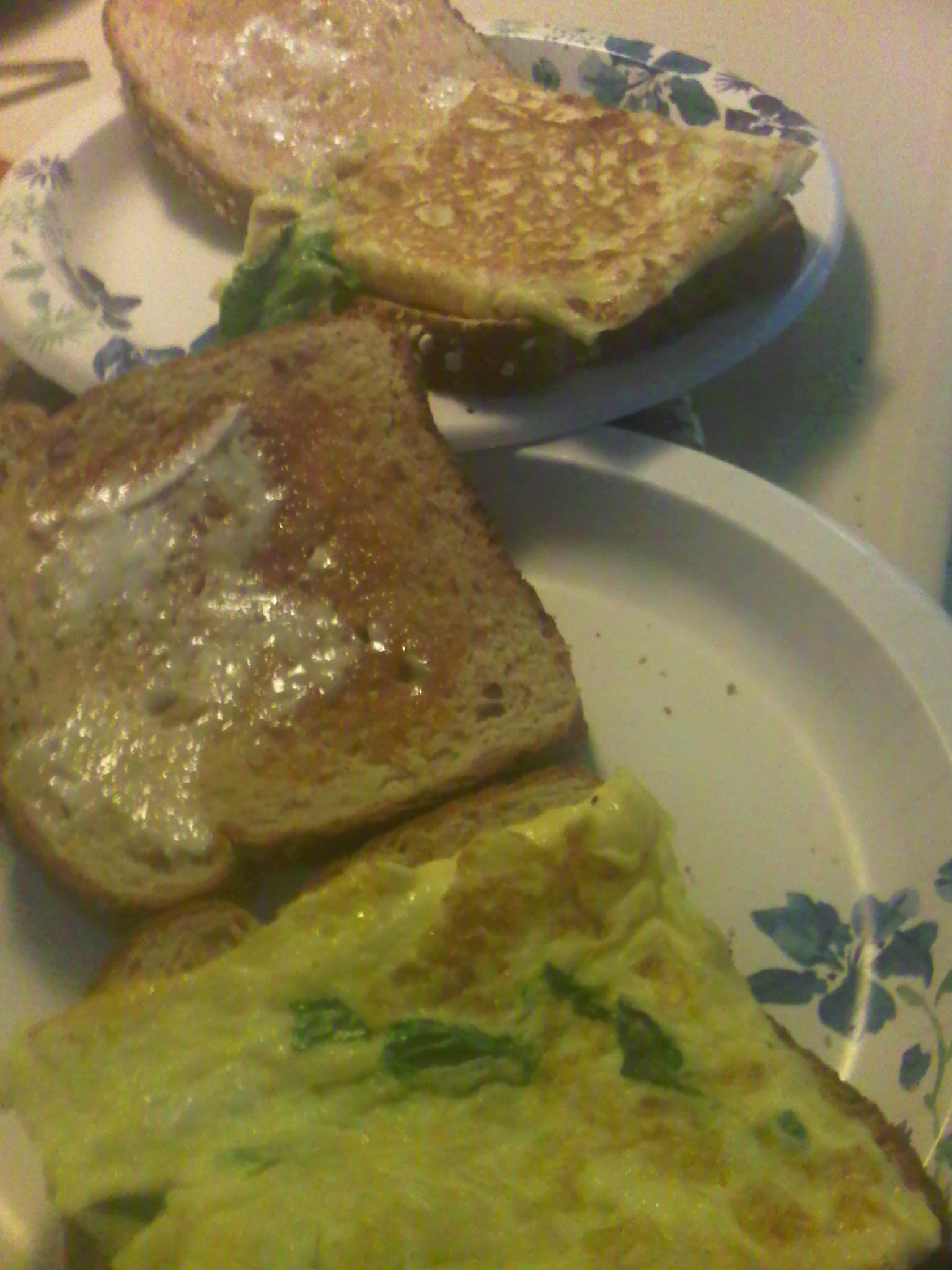 My second spinach fave, however, may seem a little weird to some. I admit, I once thought so, too! My favorite way to get raw spinach now is SPINACH SMOOTHIES. Oh they are so yummy. The trick is to throw the spinach in the blender first, with a couple of ice cubes for weight and a little bit of juice (I use a fresh squeezed orange and make sure I get a lot of the pulp in there, too.) Blend the spinach until it is smoooooooth and not chunky At.All. and your kids will not complain. In fact, they might not even know it’s in there if you don’t tell them because it adds very little flavor to the smoothie anyway! You can add plain yogurt if you like but you may need to add more juice or juicier fruits because the yogurt will probably make it thicker. Or you can skip the yogurt and just add a variety of fruits. Bananas are great for adding a lot of flavor and sweetness so I almost always add those. Now you can add anything else you want – strawberries, blackberries, pears, kiwi, blueberries… you name it. 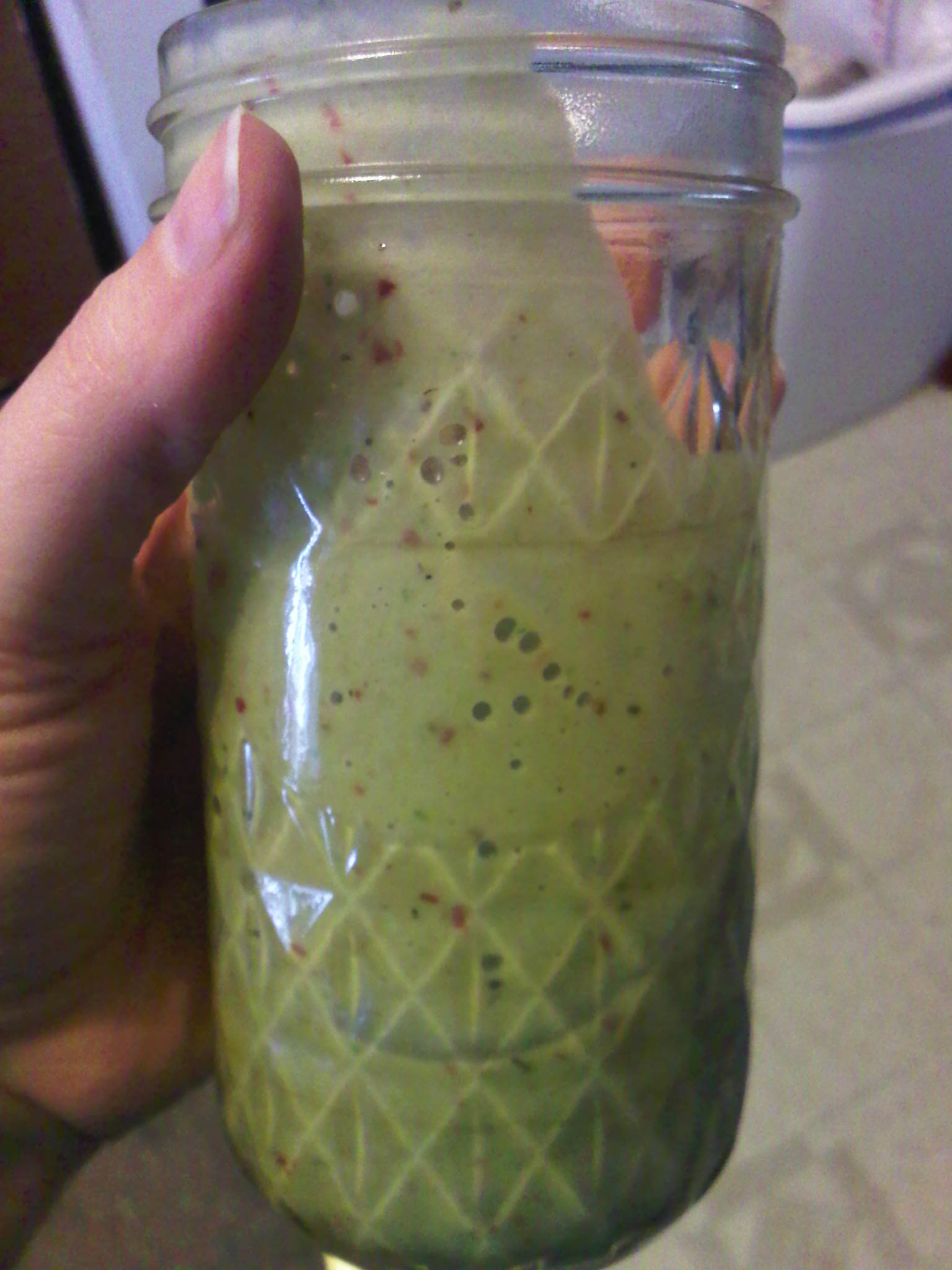 Bear in mind that some of those will add small seeds (which don’t bother me but keep my son from drinking it!) Pears make the smoothie “grittier” and not so smooth. ALL of these will make a better smoothie if you chill them first. Cold fruit = colder smoothie. Room temperature smoothies don’t quite taste as tasty. Your smoothie should start off a nice, bright, spring green color but some fruits will make the end result more brown (it still tastes good!)  Using spinach, plain yogurt, a variety of fruits, and serving with a piece of whole grain toast makes for one yummy balanced breakfast! 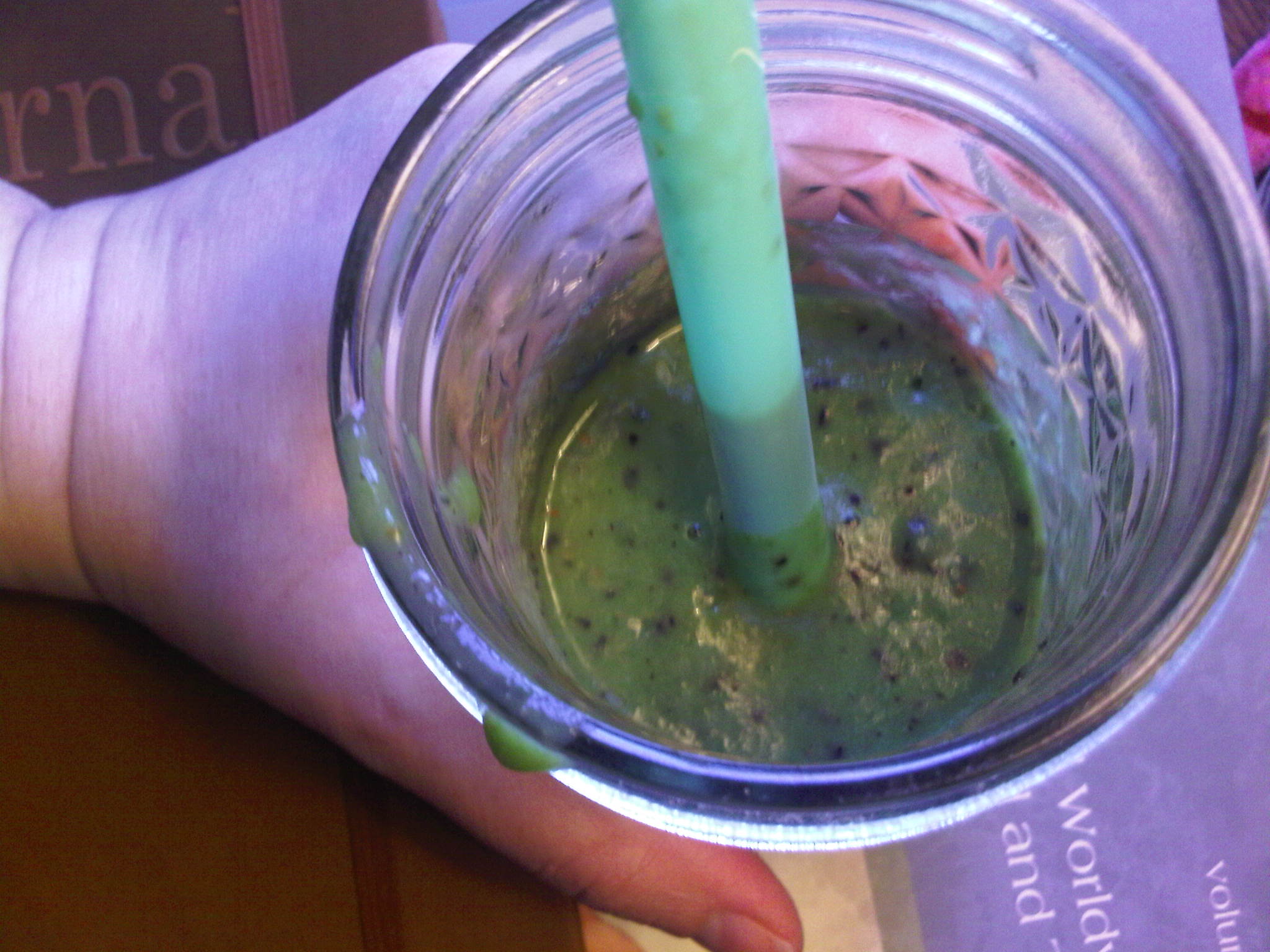 The kids are pretty on board with the spinach smoothies in general.. they have had some flavor combos they didn’t care for as much as others. And we always have fun naming them. “Hulk Shakes,” “Merry Berry Smoothies,” and “Super-Berry Smoothies” are just a few. I don’t use any specific recipes, I just throw in whatever produce I have available from the organic co-op we’re in and taste and add and taste and add until we’re happy. It works!

And it tastes WAY better than boiled spinach. 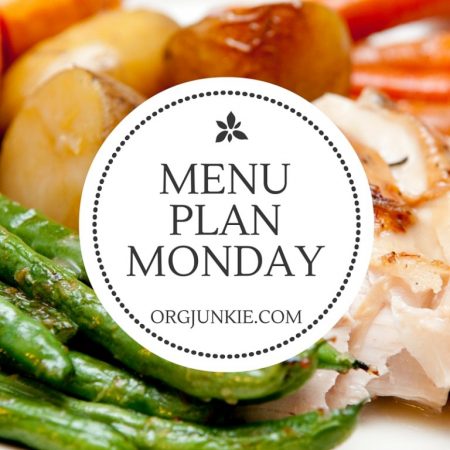 I never had spinach as a kid. I remember once, eating a dish at a potluck that was spinach. It was the grossest thing I’d ever tasted. The next time I had it was at someone’s house – they took a package out of the freezer and thawed it, and squeezed all the liquid out. It was a slimy mass of ick. I was out of college before I had spinach in the “correct” ways. As a base for salad instead of lettuce. Spinach-artichoke dip. I make a mean spinach soup (goes great with grilled cheese!). I have another soup… Read more »

Spinach (and any other veggie unfortunately) always came out of a can in our house when I was younger and certainly not so enjoyable… I do love a spinach omelette but I like to saute some red onion and garlic then add the eggs and cheese and lastly some fresh tomato 🙂 Or some spicy sausage! YUM! My other favorites are either as salad or tossed in fresh with some sauteed garlic green beans… I think I need to go make me something with spinach now 😀

Speaking of cans, that’s why our parents and grandparents boiled everything to death – something I’ve learned from canning with my mom. When you heat canned food you’re supposed to cook it for a certain amount of time to prevent botulism, etc. And I was told that when canned foods first came out in metal cans, the cans wouldn’t puff or distort like metal cans do now if bacteria grows in them, so they still over-cooked everything just to be safe.

I think the message here is that canned foods are fine for off season but fresh is best. ;0)