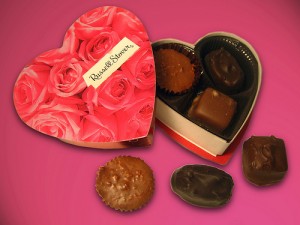 I am, and always have been, a hopeless romantic. Those grand, romantic gestures that movies are made of make my heart melt. I wanted my husband to propose to me on Valentine’s Day on one knee in front of an entire restaurant after having the ring cleverly placed in my dessert. (He didn’t, but we’ll get to that in a minute.)

I am also fluent in the love languages of gift-giving and quality time so Valentine’s Day just plays right into that, it speaks my language. I’d love nothing more on Valentine’s Day than for my husband to come home with a huge bouquet of flowers, tell me he’s arranged childcare and I need to put on my fanciest dress and then whisk me off to dinner at the nicest restaurant within driving distance.

But my husband is not a natural born romantic.

And he hates Valentine’s Day.

I think if you asked him he’d say that Valentine’s Day puts unfair expectations on men, especially romantically challenged ones, and that it’s just a commercial gimmick that doesn’t really have anything to do with how much he loves me anyway.

Of course, my argument is that it doesn’t hurt to take the opportunity to show it with some flowers and dinner. ;0)

Okay, that may be a bit harsh. I KNOW there are plenty of couples out there who enjoy Valentine’s Day together without any hype, commercialism or bias. I know plenty of women who give as equally as they receive and don’t put unrealistic expectations on their husbands.

But I think my husband has a point, too. It got me thinking back over all our past Valentine’s Days together. I tried to think of something that I’d given him, anything, and I couldn’t do it. That’s mostly because we’ve been broke for the majority of our marriage and my husband didn’t want me to spend anything–so I made supper at home and the kids and I made him a card. There were a few times that I bought a new nightgown for, um, later, but that doesn’t really count as a gift, exactly. For the majority of our marriage I’ve practiced what I’ve preached: that it’s not about gifts, it’s about spending time together. Still, we haven’t been broke our WHOLE marriage, and I can’t think of any time that I’ve ever tried to reciprocate what I’ve secretly hoped for every year.

Why do I expect so much from him but not expect to give the same in return?

It made me want to get him something nice, and thoughtful, not over the top, even if I don’t get anything for Valentine’s Day at all. Because I love him. And that’s it. And so I did. I also told him that we’ll celebrate V-Day here at home as usual, and that Monday I would like to go out to eat, as usual, but “officially” just as a date night.

James and I were going out for a date on Valentine’s Day 1998. I’d known I’d wanted to marry him for over a year, and we’d long before that V-day set a date of August 1, 1998. But the date was fast approaching and he hadn’t yet proposed. He wanted to ask my parents’ blessing first but he kept putting it off. (He was certain my Dad was going to say “no”; I kept telling him it would be my Mom!)

James came to pick me up for our date, but instead of asking my parents for their blessing before we left (so that he could propose during our date,) he got cold feet again. I tried really hard not to hold it against him for the rest of the night. He felt really bad, he really did. (It’s okay sweetie, I still forgive you!!) The next night there was a Valentine’s Day banquet at church, and he somehow got the nerve up to ask if he could come over afterward to talk. We sat there watching tv and watching the clock get later and later until my Dad finally asked, “Can we get this over with so I can go to bed?”

As I predicted, my Dad said I was an adult and could make my own decisions and went off to bed. My mom wanted to talk about it for about an hour. A week later we went on another date. This time my sweetie proposed after our dinner, alongside the lake (water) with a candle in one hand (fire) and the truck radio playing (music – the three elements I’d listed for a romantic evening) while I sat on the tailgate and he got down on one knee. I wanted to laugh and cry, but the laugh won and I kissed him and the urge to cry melted away.

I don’t remember that calendar date, but I remember that moment clearly. And unfortunately for him, I’ll always remember the day after Valentine’s Day as the day he got the nerve up to ask for my parents’ blessing on our marriage. It may not be the most romantic story ever. But it’s OUR romantic story. The story of the romantically challenged man who asked the hopelessly romantic woman to marry him in a parking lot beside a lake, holding a taper candle.

This Valentine’s Day I’m breaking down expectations. I’m letting my husband off the hook. And I’m the one planning thoughtful, romantic gestures. I’m hoping it’s not lost on my romantically challenged husband and that he does like it. I’m hoping that the thought behind it works to show him how much he means to me.

NOT because of the gift, but because I love him. I really do.

Updated to add a little follow up:
Since completely letting go of any expectations, Valentine’s Day last year and this year have been exceptionally more enjoyable. I bought some Valentine Decorations and some chocolates for all of us and it was just an enjoyable day together. Hubby does add his sweet little gestures and in the end it’s a really good day.

Of course I want to hear from my husband that he loves me, every day, and on this day especially. But when it comes down to it, I want him to tell me in his own way, make whatever gestures he wants to make. Neither one of are happy if I try to manipulate any certain behaviors or responses out of him, and it’s not loving on my part if I try to do that. Thoughtfulness is encouraged by thoughtfulness. Manipulation breeds discontent. How much better it is to make Valentine’s Day less about “what am I getting out of this?” and more about “how can I show love to my spouse today, moreso than every other day?” For that, as Christ says, is really what love is all about.

That is SO sweet. I love this story Amber! I’m glad you wrote it. I really am!

I’m like your husband and not fond of Valentine’s Day. But this is some good stuff.
.-= Michelle Pendergrass´s last blog ..Visual Prayer–Tears in God’s Bottle =-.

Amber you are an amazing writer; I hope you are working on a book. I stumbled upon this site quite by accident while looking for ideas for a valentine dinner for my husband. My comments are thus: I think your husband better kiss the ground you walk on or at least pave it with fresh rose petals because I am fairly certain you are the most patient and understanding wife on earth. It does read a tiny micro little bit that you are making excuses for his laziness. You can tell him I said that he needs to get off… Read more »