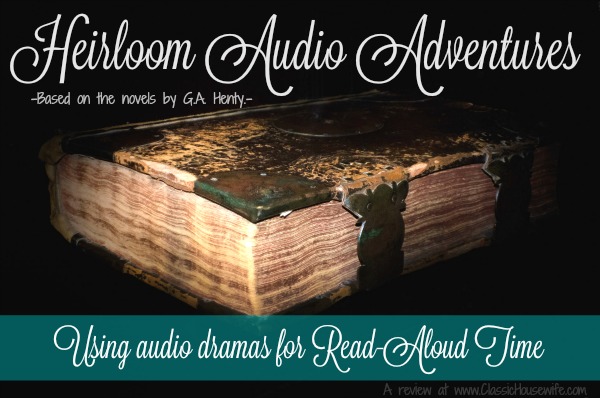 *The following is an Heirloom Audio Adventures review–a new product we are trying out for the fall semester of 2016.*

This past spring, our homeschool got stuck in a rut.

While we took our out-of-character-for-us Summer Break, the kids and I discussed changes to make this year, such as adding our read aloud time back in, making sure we get enough fun learning in, and spending enough time on history and science.

Of course, the best laid plans in our house are never complete without a monkey wrench. Now that we have enrolled Catie in a dual-credit course at the community college in the next town over, we have to make sure that we reach our goals while driving her to college class once or twice a week.

However, commuting does provide one obvious learning opportunity: listening to audiobooks during the drive. Or in this case, audio DRAMAS. 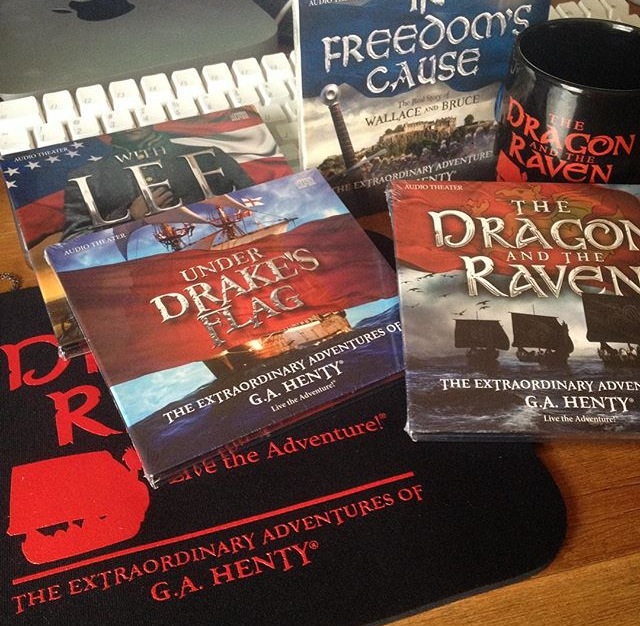 You already see where I’m going with this right? We’re going to be listening to Heirloom Audio Adventures in the car on the days that we drive Catie to her class. And since it’s both entertaining AND educational, it’s a win-win!

Heirloom Audio Adventures are exactly what they sound like: adventure stories handed down from the past–or specifically, G.A. Henty’s historical novels brought to life through sound, music, dialogue, and action for the ears.

We’ve had the pleasure of reviewing Heirloom Audio Adventures for the past couple of weeks–something which you know I don’t do without a genuine interest in an item, or without some certainty that you will find the item of interest as well.

Since you also know that I have a deep fondness for history, for living history in particular, and a great love for the creative arts (from music to poetry to art to drama,) it should come as no surprise that I took on this review. The fact that the audio dramas are written from a Christian perspective, peppered with biblical truth and examples of the Christian faith, really sold me on it.

What is an audio drama?

Each of these audio dramas is at least two hours long, too, with professional actors (many of them recognizable from some of your favorite movies and shows,) professional script writers (some of the former writers for Adventures in Odyssey,) and original music by Emmy-winning composer John Campbell.

These audio dramas will allow us to add “read-aloud time” back into our day during our commute, with a lot more pizzazz than I could ever achieve. (Even though I am pretty good at accents.) 😉 Furthermore, they each come with a discussion guide, too.

Audio dramas can be used for read aloud time in the afternoon, car schooling, quiet morning time, or even as a spine for a unit study. Grab some playdoh, legos, or adult coloring books if you need to keep your hands busy while you listen!

The Dragon And The Raven 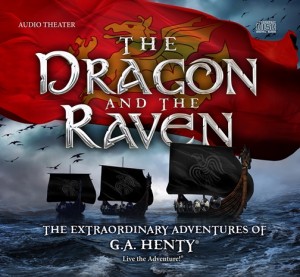 Our first Heirloom Audio Adventure experience was The Dragon and The Raven — the retelling of the G.A. Henty novel of the same name, about a young man Edmund who fights to protect England against the Danes (the Vikings,) alongside the young King Alfred of Wessex.

This story is truly adventure-packed, and very well done. Fighting on land and on sea, hand-to-hand combat with Vikings, an intense duel. . . action, adventure, and more action. But more than just sword fights, terrible losses, and great victories, this story also highlights moments of faith in God, fervent prayer, and mercy for others.

You might even recognize some of the actors that bring these characters to life. My kids thought it was pretty cool to see some famous actors on the back of the cd case.

The kids thought it sounded pretty great, too. The occasional snicker or smirk was made when a funny line was delivered, and the tense music and dramatic reading grabs your attention for the more intense moments. 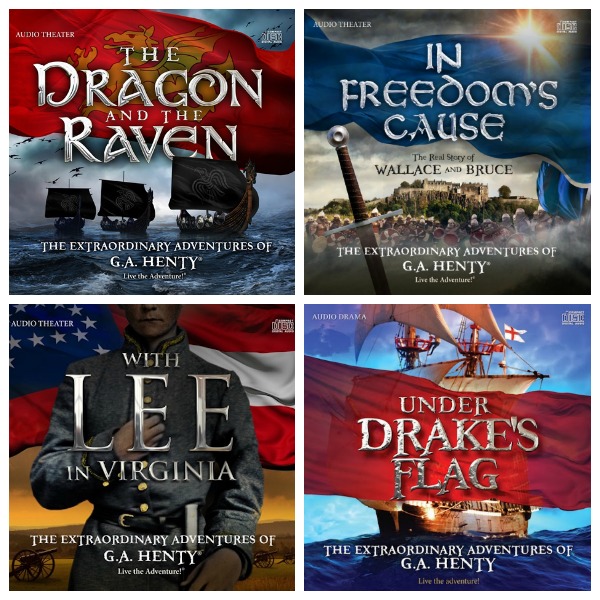 The Dragon and the Raven is part of the Family Adventure Collection, the first four audio dramas produced by Heirloom Audio. With a fifth audio drama out already, and a sixth one available for pre-order, their audio library is growing quickly.

The Family Adventure Collection consists of: Under Drake’s Flag, In Freedom’s Cause, With Lee in Virginia, and The Dragon and The Raven. Each of these come with discussion guides, and when you buy them in the collection they also come with .mp3 soundtracks and a bunch of other goodies.

Time out: As an avid comparison shopper, I’ll point out that you could buy them separately at $25/each– but without the extra goodies, and you’ll spend more than you will on the Adventure Collection 4-pack. That sounds like a sales pitch, but it’s not, because I don’t make anything off of sales– I just did some research and some math because that’s what I do. That’s what all homeschool moms do. 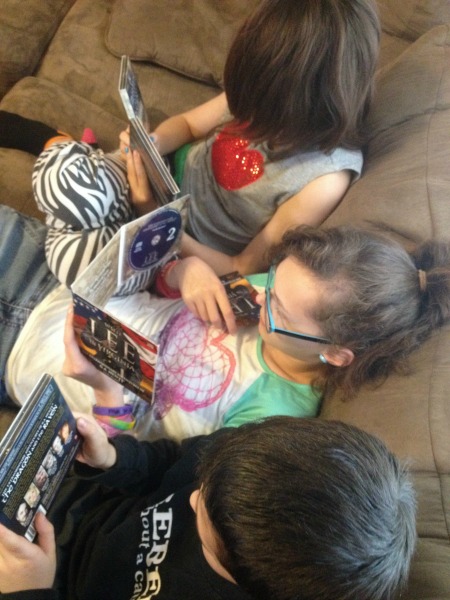 I’m really looking forward to having read-aloud time again. Since our commute is only 30 minutes, and I will only take the other kids along for the ride on Wednesdays, (and since we want to listen to The Dragon and the Raven again,) we will be listening to the Family Adventure Collection over the next eight weeks or so!

I’m looking forward to enjoying to the other three we haven’t listened to yet–especially “In Freedom’s Cause” because the story of William Wallace is a favorite after studying the true story behind Braveheart. 😉

To learn more about Heirloom Audio Adventures and their audio dramas, you can find them online, and on Facebook. If you have any questions, just leave them below!

Disclosure: I received these items free to review from Heirloom Audio. I will also be compensated for my time and effort. As always, compensation never sways my opinion or my conviction to be honest and true to my readers. Thank you! 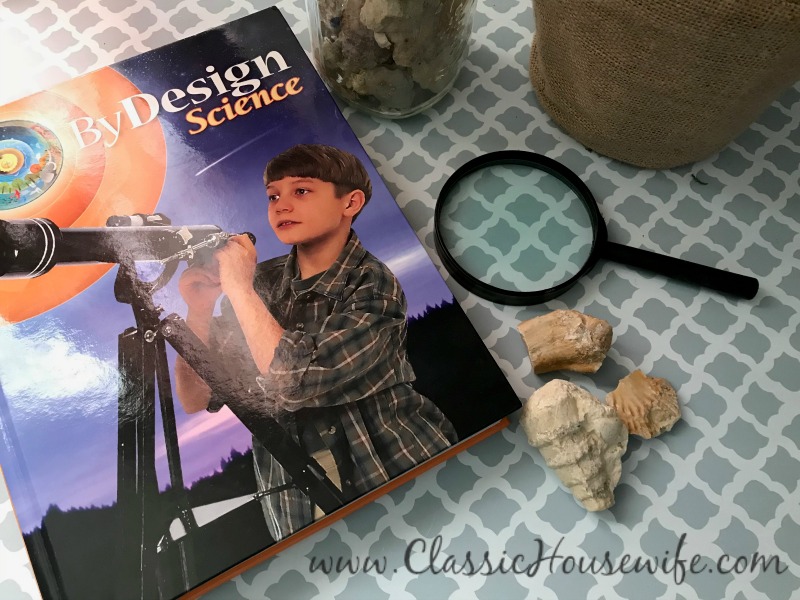 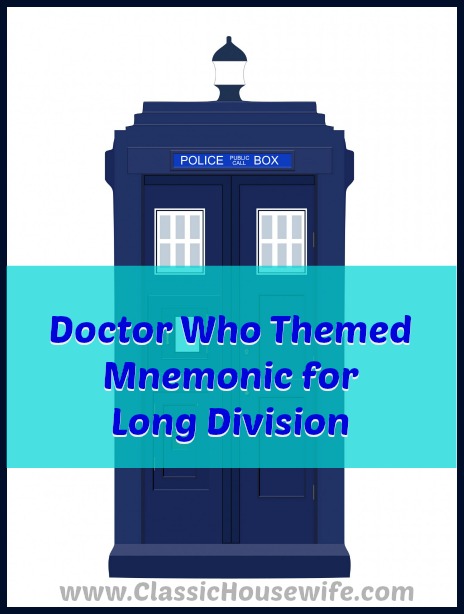