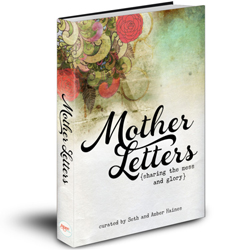 Remember the Mother Letter Project? The romantic story that swept the blogosphere when a mysterious sweet husband asked for encouraging letters to his wife to bind together and give to her as a Christmas present?

It’s been a few years, and the Mother Letter Project has birthed a few developments along the way. And they’re not done yet. Seth and Amber are at it again, birthing a new project — a Mother Letter book.

They have gathered some of the original “mother letters” (with permission) and turned them into an e-book that you can purchase and give to a young mother in your life who  may be in  need of a bit of encouragement herself. (Probably every young mother, or mother of young’ns, either way.) They’re putting the final touches on it, but it just needs one.more.thing.

Between now and  March 23rd, Mother Letters is taking submissions for your original photos in a variety of categories – some of which will be chosen and featured in the Mother Letters Book which releases in April.

And this post would be incomplete if I didn’t mention that a percentage of the ebook sales goes to help financially support the Mercy  House (a house for young mothers in Kenya founded by Kristen Welch at We are That Family.)

So if you haven’t “met” Seth and Amber yet or haven’t heard of The Mother Letters, take a stroll over to their new site and meet them. And while you’re there, take a peek at the list of “mother” contributors. I’ll give you a hint, if you clicked on the first link in this post, then you’ve already read one of the letters in the book. 😉 And I bet you’ll recognize a few other names on the list as well. And I’m willing to bet that the other letters in the book are pretty awesome. =)

I must admit, the other day, when I saw the list of contributors, I squealed with joy when I saw your name. =) I’m looking forward to reading the book!