Show Him Some Love

Emily (new bloggy acquaintance found through the UBP!) has a REALLY GOOD challenge going on right now. It’s a “Show Him Some Love” challenge. I like the sound of that!!

I’ve written a little bit before (here and here and here and here) on how I feel about my husband, loving him, wifery, etc. It’s something I hope to write more about in the near future. And this challenge is a good way to get started. 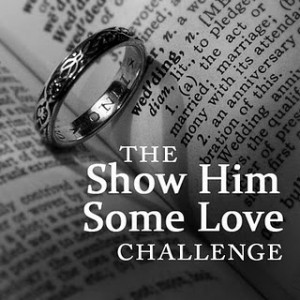 The basic idea is that you read over this list of 100 Ways to Show Love to your husband, pick 5 to complete by/work on until May 27th, and write a post about it. The writers of the list suggest that you go over the list with your husband, so that he can indicate which things are important to him, which things he doesn’t care about. YEAH. Not gonna happen. My husband hates stuff like that and I can guarantee that at the top of his list would be “Don’t bug with me with questions, quizzes and things I have to think about.” Yup.

Fortunately for me, and for him, I know him pretty well.

And even if there are some things on there that he might like that I don’t know about, I’m pretty confident that I can pick 5 ways to show him I love him that he will actually appreciate.

So which ones did I pick?

Well here’s a list of things I KNOW he won’t care about: “Take time for the two of you to sit and talk calmly (schedule it when necessary);” “Surprise him with a fun gift of some kind that he’d really enjoy;” “Initiate going out on romantic outings (when he’s not tired);” “Hide notes for him around the house where only he will find them.”

And here’s a list of things I already try to do regularly enough that it would be a cop-out to pick these: “Respectfully communicate with him;” “Either show interest in his hobbies or allow him space to participate freely;” “Don’t allow any family member to treat him disrespectfully. Be the one to defend him to any family member that dishonors his place as your husband;” “Extend God’s grace to him and be forgiving when he offends you;” “Rub his feet or neck, or scratch his back after a hard day;” “Be his “help-mate” in whatever ways you sense he needs it;” “Don’t expect credit for all you do for him. Do it as “unto the Lord.;”

So, after all that, here’s the five I ended up choosing:

And here’s one more that I’m adding, that he would probably roll his eyes at, that I don’t do enough, but that I’m not including on the list of 5 because I think it should be above and beyond my daily actions and words:

Pray for him to enjoy God’s best in life. 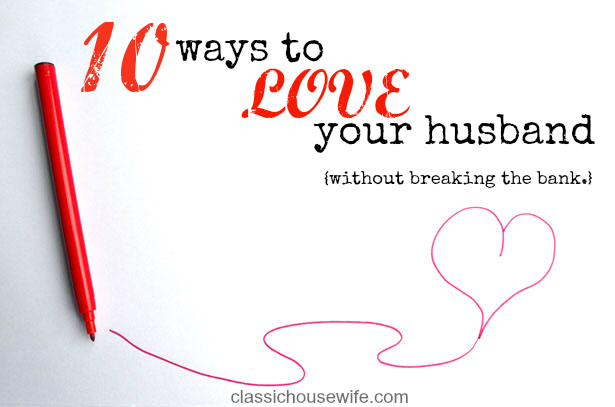 Amber! Thank you SO much for participating – I LOVE this post! It’s perfect.

What a wonderful reminder to always be working on and growing our relationship with our spouse! You’ve shared some great ideas!