In Which My Hubby Might Actually Be Right. Again.

Yes, I know it will be a huge gold star on his ego. I’m okay if you don’t tell him (he’ll figure it out soon enough anyway!)

At the beginning of the school year I mentioned that Big Daddy had suggested that we do school out in his office–a small one-room building apart from the house, used by our landlords originally as (wait for it…) a SCHOOL ROOM. Imagine that. 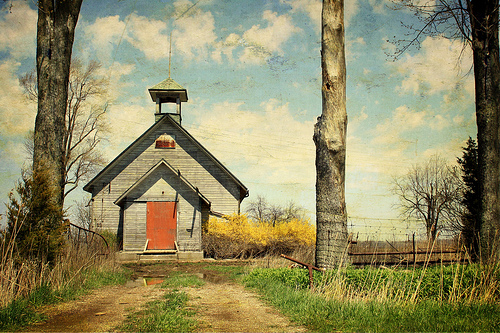 I admit I have resisted that idea for a while now, though I briefly toyed with the idea at the beginning of the school year, and by the time the room was available again I’d completely gotten over that temptation and was just fine and hunky dory with our school area in the dining room.

HOWEVER… (you saw that coming a mile away didn’t you??) We’ve been doing school in our little “one room schoolhouse” for three days now and *gasp!* it’s not so bad.

First let me just re-hash, for my benefit & yours, the reasons I resisted doing school out in his office.

My apparently not very solid arguments:

Operative word there being WAS.. as in NO LONGER is it messy. Hubs has since cleaned up and somewhat organized the office and there are actually 3 neat little spots (non intentional on his part) for the kids to sit and work.

Well, the bathroom is still in here, BUT.. the boy is old enough and has proven that he can be accountable to make a quick trip into the house for XYZ and come right back (and close the door on the house.) And as far as the bathroom goes, he’s a BOY, and he’s more than happy to find a tree outside, because he’s a BOY and Daddy told him boys can do that, and Momma affords him only so many opportunities to take advantage of that BOY ability. (Thank you, Daddy.)

True enough, but if we’re out there we are also not making any messes IN HERE. Some quick morning chores before we head out there and the way house will stay JUST LIKE IT IS until we get back in here. HUH. Imagine that.

4.) But I don’t WANT to spend all day in one room doing school, it’s not the way I picture our school.

True. However, we haven’t been heading out until just after lunch and we’ve been finishing before time to start on supper. “All day” really looks more like 3-4 hours. That’s not so bad. In some ways there are more distractions (little brother is right there needing to be occupied the whole time) but in other ways there are less (“We are here to do school, only school, nothing but the school.”) There is no tv, no toys, nothing but focusing on school work. And yeah – of course we take a couple of short breaks.

5.) But I’ll get BORED out there while they are doing their assignments!

I thought that between teaching I’d just be sitting out there watching them work. I dunno, I can’t say why I thought that. (I mean, there is after all the 4yo to occupy.) I also can take my laptop, which I DO, and try to work on things like answering and cleaning out email while I monitor their work. It’s totally doable. And since I don’t have any distractions either (there’s no laundry, no dishes, no messes to clean up) I actually get to focus on whatever I’m working on! You know, in between the teaching, the answering questions, and the reminding to stop helping little brother play his game and get back to work. Also, I can step out for a few minutes to switch over a load of laundry or take the 4yo in the house with me to make a snack. It actually works.

In addition to all these busted arguments against going out to the office, there are also a few other reasons in favor of it.

As if I needed more reasons to prove Big Daddy was right:

Oh yeah, it might be prudent to mention that last point now, seeing as how that is why we are out there in the first place. IT HAS AIR CONDITIONING. Last fall we decided to completely turn off our central heat and air unit. It was doing absolutely nothing and costing an arm & a leg. I won’t get into why we aren’t fixing it in this post, just suffice it to say that this house is going to be bull-dozed down in a few months. We may break down and get a window unit eventually but right now we are surviving without any air conditioning and lots of open windows and fans and that’s okay. The hottest part of the day, however, the afternoon, has recently hit “just about miserable” (since Texas seems to be quickly careening away from Spring and into Summer. Hello, Texas.)

Enter Big Daddy’s one room schoolhouse suggestion again. And you know what? I hate being hot and miserable. I am a whiny baby if my house gets over 80 and it’s been 85-87 in my house the last few afternoons. So you know what?

I took him up on his offer.

And I liked it.

We’ve been taking care of chores and having a bit of free time in the morning when the house isn’t hot, and then moving to the office after lunch to spend the hot afternoon out there comfortably working on school work. We’ve been finishing up about the time Big Daddy gets home, at which point they get outside play time while I cook supper. It works nicely. Very nicely.

I know. Call me whatever you want, I fought it and I whined but I actually don’t mind it like I thought I would. (I admit, the a/c helps a lot.) I think we’ll keep doing this a while. And I might actually want to keep it this way, even after we get the other house over here (which will have a little bit more room for doing school) because of all the reasons listed above.

But I haven’t mentioned that part to Big Daddy yet, either. We’ll just see how this goes. ;0)

WOW! That is so cool! I can’t believe you have had this all along and not used it!!! 🙂 That sounds like a wonderful set up for you guys. This is my first year to have school at the kitchen table, and I have realized that I am a school room girl. I miss our school room I like having a place that is “for school.” It helps to keep me focused and keep from getting distracted by other things. When we went into our school room…it was school time! Nothing else. I loved it that way!!

Katie – LOL! Okay, to be fair, it hasn’t really been cleaned out and useable as a school room until this year. Plus, I don’t know if that would have worked as well with a 1 yr old, or a 2 yr old. And maybe not even a 3 year old. And who knows if it would have gone as smoothly for the 4yo if we hadn’t already gone without cartoons for a month. ;0) I’ve always liked the idea of a school room I just thought it would be IN the house. But this seems to be working well.… Read more »