Are You Trustworthy? (Part One.) – Marriage Minute 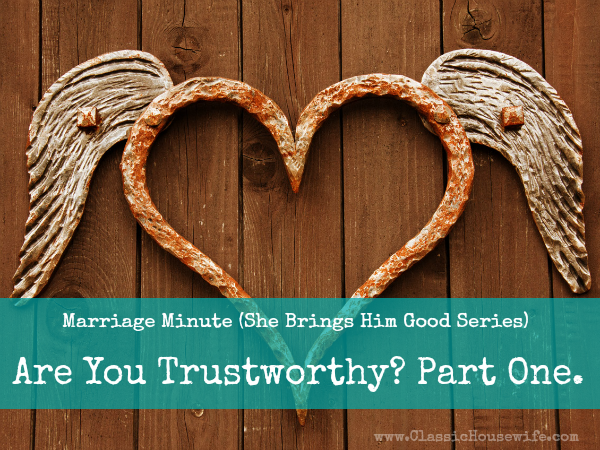 What does it mean to be trustworthy? 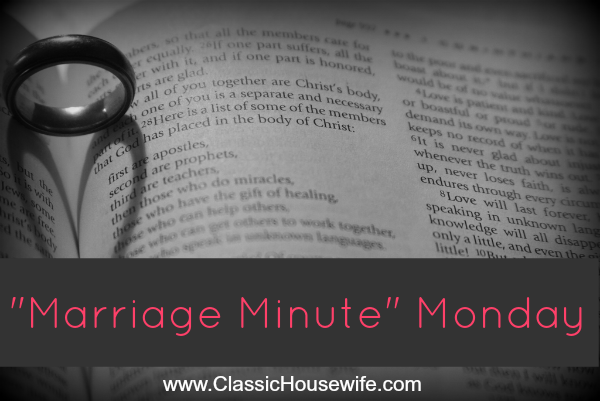 We’ve been working our way through a series on Marriage about bringing good things to our husband and to our marriage through respect, trustworthiness, and love. We have covered three different ways we show and build respect for our husbands (through submission, our speech, and trust,) and now we’re ready to dig into another important issue in marriage: trustworthiness.

{You can find all “She Brings Him Good” series posts here.}

Three Ways to “Bring Him Good”

– Respect Him Through Submission

– Respect Him With the Words We Speak

– Respect Him By Trusting Him

One: Guarding our relationship with him

I can’t stress enough the importance of protecting our relationship with our spouse so that he feels like he can trust us to be faithful. My husband openly talks about the video game addiction that he had during our second and third years of marriage. During this time, James was immersed in Everquest-Land, and me, being a social extrovert, spent a lot of time with my friends. However, both of my good friends were single moms, with more single friends, including, single guy friends. My husband was AWOL in our marriage, and so I hung out with my friends every weekend playing cards, sometimes at our house, sometimes at my girlfriends houses.

And what happened when James came out of his Everquest Coma? He realized he didn’t really know what I had been doing with my time, or the guys I played cards with, or the one guy I was good friends with. He didn’t know.

And when he told me years later that he still wasn’t completely sure I hadn’t cheated on him, my heart sank, because I had given him cause to wonder.

Here’s the thing though, one of my single mom friends had already cautioned me , way back then, to take care with that friendship. She herself had become involved in affair with a married co-worker, and she told me “It never starts out on purpose. It starts out innocently, as friends, as co-workers. You don’t set out to have an affair, and you don’t see it coming until you’re too emotionally invested.” I listened to her, I did. And I listened to God, who led me to significantly back off of that friendship. James probably subconsciously picked up on that though, and when he was paying attention again, he wondered. I hate that he wondered.

The biggest thing I took away from that experience is that nothing is worth putting our marriage relationship in jeopardy. Not Friday night card games, not friendships, not hobbies. We have to guard it, protect it. It is THE single most important relationship we have on this planet.

The Bible says, “The wisest of women builds her house, but folly with her own hands tears it down.” (Proverbs 14:1) We have the ability to build our house, or tear it down, with the choices that we make.

How could I have done things differently? Did I just need to stay home all the time, alone, bored, ignored by my husband? I would say NO. In fact, my husband and I are still very different in our desires for socializing with others.  But what I have learned since then, and could have done differently at that time, is that it’s important for my husband to know that I have clear boundaries in place to guard my relationship with him, and that there are things I can do to avoid any shadow of deception with him, so that he doesn’t ever wonder if I’m being truthful and trustworthy.

Two: Using wisdom with other relationships

Be careful about getting close to other guys.

Do you know the biggest “source” or “cause” of extramarital affairs, for WOMEN, in today’s society?

For women, affairs really do usually start innocently enough. When a relationship is inappropriately indulged, it leads to an emotional affair, before it ever leads to a physical affair. Because for women, confiding in another person, male or female, builds connection. Sharing pieces of ourselves, our hearts, builds relationships. That’s how we are wired. So it follows that spending too much time confiding in a man friend who is not our husband is an unwise decision.

Talking to a man isn’t wrong. I’m not saying that. There’s a difference between talking and confiding. And confiding in a man doesn’t always lead to an affair, but if you find yourself wanting to lean on that person, call them up as soon as something happens, etc, then that’s definitely a warning alarm, and you should listen to it!

Another thing we ladies need to watch is flirting.

I don’t believe in “innocent flirting.” Two synonyms for flirting are “to toy with” and “to tease.” The men we need to be flirting with are our husbands! Flirt with them all the time. But then follow through, of course, don’t just tease and toy with your husband. Flirting earlier is a good way to get some things started later.

You know what I’m sayin.

How do you know when conversation veers away from good natured joking and enters flirting territory? You should be able to tell pretty easily but here are some signs that one or both of you have crossed into the flirting zone: those little intentional physical touches, the twinkle in the eye, too much giggling and laughing, overuse of eye contact, finding the other person “checking you out” as you walk past (or the other way around,) making excuses to talk to another person, standing too close, and inappropriate jokes with each other. You know what it looks like. Avoid it.

And lastly, we have to be careful about being alone with other men.

Personally, I choose to avoid it if at all possible. I don’t even meet with pastors or other leaders alone.  James knows this, and that’s why I do it. He knows without a doubt where I stand on this now. I want to eliminate the possibility of him even starting to wonder.

In fact, my husband knows how committed I am to avoid being alone with other men, that he will tell someone who wants to meet with me that I won’t meet alone and he will need to be there. And everyone that I have ever needed to meet with not only agreed that it was a good idea, but appreciated it. They recognized that it can lead to suspicion at the very least, if not something more, and they want to avoid the appearance of sin as well. It’s good for all parties involved.

There is still one more area of trustworthiness I want to address, but not today, and it doesn’t have to do with faithfulness in marriage. It may not be something  you expect, but it’s also very important.

Until next Monday, tell me, have you seen the importance of these two things (guarding your marriage relationship and using wisdom in others) play out in your own marriage as well?