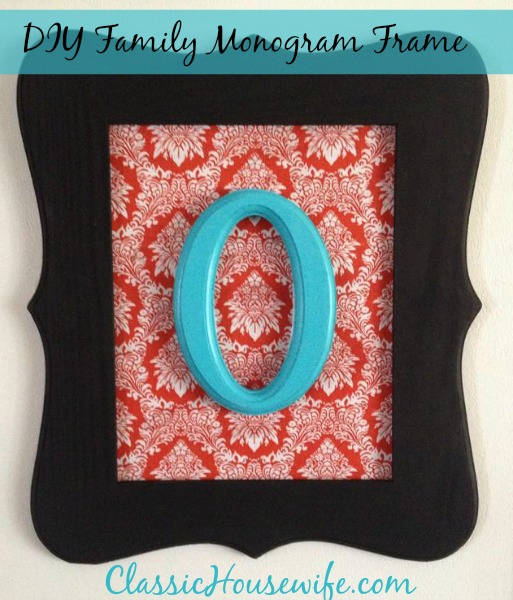 When we moved in to this house a year and a half ago, I quickly slapped a handful of family pictures up on the wall in the living room to cut down the bare walls and that was that.

And that was a year and a half ago. And until last week, my picture wall still looked the same. 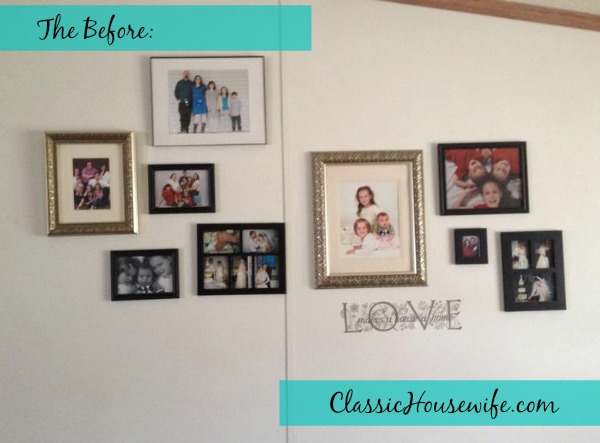 Actually, the wall cling is new, from the Dollar Tree, and has been there for two months at the most. But that doesn’t count for much does it?

I’ve been thinking about that picture wall. I mean, it’s not a priority, but making the house look nice does fall under my list of duties, right? I have a few more pictures I can add, but we don’t take nice family pictures that often. What else did I want up on that wall? How could I make it better?

My brain thought back to some projects I’m pretty sure I’ve seen floating around Pinterest and I thought, “I need to get an “O” up on that wall, for “Oliver,” inside some kind of fancy picture frame. I need that, and a clock.”

I have lots of “intentions.” I fully intended to buy an already finished picture frame (and I also fully intended to get around to that project sometime soon eventually, too..) but I kept putting it off. When I ended up in Michael’s with my mom a few weeks ago, I found an unfinished pine frame and I dove into “Pinterest-Land” with both feet. Armed with a lovely 8×10 frame ($7.99) and an unfinished “O,” ($2.99) and knowing that I had plenty of paint at home, I checked out and carried my project items home. (Oh, I had more in my shopping basket but that’s another story..)

At first I planned to paint both and remove the glass and backing from the frame and hang them both directly on the wall–a big “O” inside an empty frame. I’ve seen stuff like that, right? But while I was at Walmart a few days later, I found an orange and white damask quilting square that I just loved. Bigger than 8×10 and less than $2.00, I changed my plan – hey, I do that from time to time.

And wouldn’t you know it? But a few days later, I found myself at Hobby Lobby and I found a clock I really like that had been damaged and marked down to only four dollars!! And since the kids were at camp all last week, I actually had the time to do something. =) 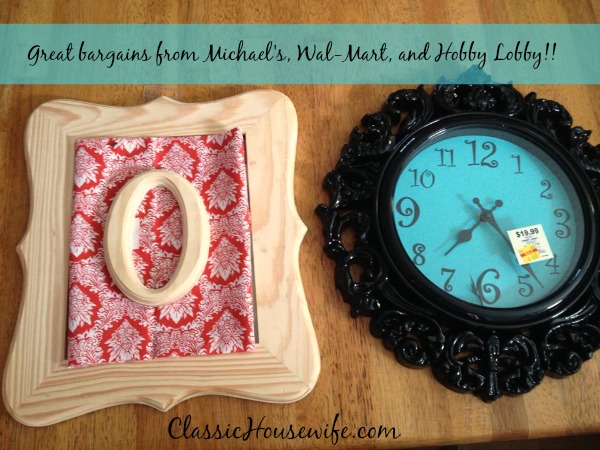 Making the family monogram picture frame was pretty simple really. I painted the frame and removed the glass- which actually turned out to be plastic anyway. I spread a thin layer of wood glue on the back insert of the frame and centered my cut piece of fabric onto it, folding the edges over. Once it was dry, I fit it snugly into the frame and wood glued the painted “O” onto it. Once everything was dry I was able to hang it onto the wall. 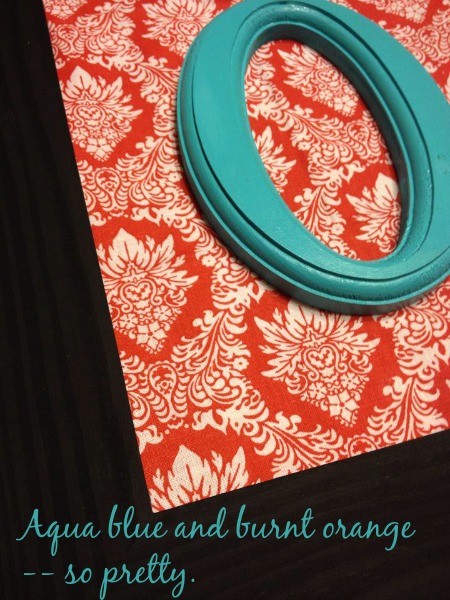 After rearranging my pictures slightly, adding the “O” and the repaired clock, I love my picture wall so much more. I still need to get a few more family photos up there, and we need to take new family pictures this Fall. I also want a cross up there, I think. Or maybe I’ll paint one and put it in one of these ornate frames. I’m on a Pinterest high! I feel like I can do anything! (I jest. Sorta. Maybe.) 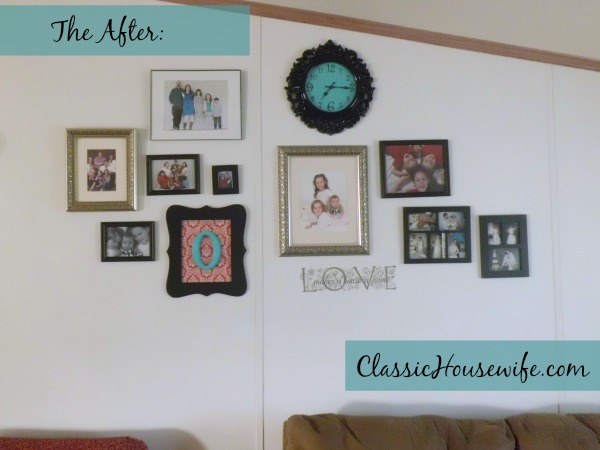 The only thing it needs now is some sticky tack to tack all the corners down and keep the pictures perfectly straight and level. 😉 (Yup. I’m one of THOSE people.) =)

So pretty! The clock and the O really pull it all together! We took all of our family photos down when we remodeled and painted our main floor, and have yet to put them back up. That was over a year ago. Doh! 😉

Thanks, Dawn!! It was really so easy once I got around to it — it’s making the time that’s the hard part. 😉