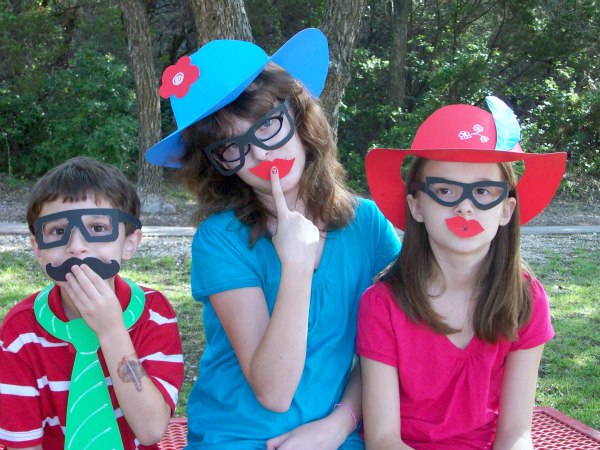 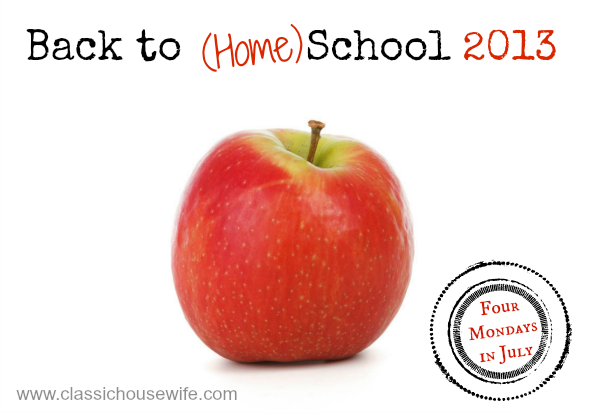 Can you believe it’s July already? I truly can’t, I’m still in shock.
July brings many things: Summer heat, the Summer Slump, and that familiar itch to ditch the old school year and get started on the new one!

Things are a bit different for us this year. Since we took off most of November and December to move into the new house we are still knee deep in the 2012-1013 school year. We will continue “doing school” for the rest of July, in fact. We’ll eventually hit a point where we have to stop, call it the end of the year, and start fresh picking up where we left off with whatever we didn’t finish.

To that end, I’ve declared July, “Summer School” and I’m calling it “No Math Summer School.” The kids LOVED that part. We’re going to focus on history, science, art, music and fun projects. Hopefully it will be a Summer of Learning Fun. We’ll take off 2-4 weeks in August and then begin our new year.

Enough about our mixed up school year!! There are some big changes for school this year….

Exciting changes are in the air!

1.) We have a new school space! I’ll get into that more when we share our school rooms, but for now I want to say that we have a better space to store and organize our stuff. We’ve been in this house for 6 months already (sheesh! Has it been that long??) and I haven’t fully set it up and utilized it to its full potential. One of goals for our No Math Summer School is to finish setting up our space. We’ve gone ahead and started using it the best we can for now. I’m really excited about our new space. Squee!!

2.) We have a teenager, and a soon to be highschooler!! EEK! She’s doing 8th grade work right now but as she finishes those things she’ll be moving into high school work. WHERE HAS THE TIME GONE? For realz. This is both exciting and terrifying. The burden to teach her well just cranked up a few notches. *biting nails* We have good suppert and good resources and I’m praying that God gives me the diligence and wisdom I need!

3.) I’m ditching the pseudonyms! Yes, you read that right. My husband and I talked it over and I’m using this post to purge the kids’ pet names and share the real ones. So let’s go meet my students!

Our Students (Our Kiddos)

Formerly known as “Princess,” Catie is my artsy one. She has dabbled in sewing, crocheting, knitting, drawing, fashion design, painting, writing, and all sorts of things. Her current interest is creating cartoons with her new cartooning software

. She’s also still in the middle of writing a fictional novel. She loves to read, she’s learning Spanish, she’s pretty great at spelling and other language arts (she doesn’t care for writing reports or essays though!,) and she doesn’t mind history and science. Her least favorite things are non-fictional writing and math.

You know her as “Drama Queen,” she’s our Arielle (which started off something like how Sebastian the Crab says it and ended up like Flounder the Fish pronounces ‘Ariel.’ You win some, you lose some.) She’s my little musician. She sings and plays guitar. She sings while she’s doing her work, too. She is good at math but has developed a dislike for it (BOO.) She likes to read but she prefers to be active. She doesn’t like to write, either, but that’s mostly because the act of physically sitting still and writing is so taxing to her. (Those wigglers!) Arielle’s finishing up her 4th grade work right now.

Little Prince, aka “The Boy.” All boy, all the time, Alexander is my deep thinker and mathematician. He always surprises me! He prefers hands on activities, science and math. He doesn’t like the physical act of writing, he’s not crazy about reading, and he shuts down if you ask him to sit still and be quiet. He still lets me read to him — if there are pictures or if the story is particularly interesting to him, and if not he will listen anyway if I let him play with blocks or something. Alexander just started his second grade work and if he’s awake, his brain is going!

Where are you, what year are you in, how many students to you have? It’s your turn to share your students and your school with us. 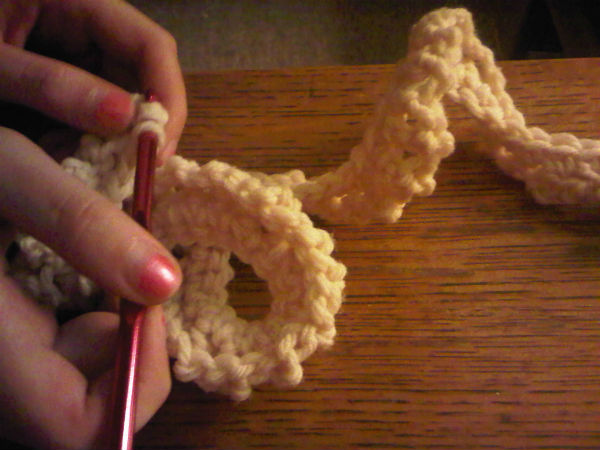 Looking forward to seeing your school room. I’m hoping to get ours set up better before we start back at it on August 19.
–Gena