Once upon a time.. there was a fairy princess.

No, it was a homeschool mom.

And she found a magic wishing rock that would make all her dreams come true.

No, that’s not true either. It was a new homeschool system that was going to fix all of her problems. And it did. Sorta. Well, some of them.

Yes, that homeschool mom was me. And yes, that system was the Workbox system. Two school years ago, I fell in love with the idea of my children working independently, and being able to move on with their lessons while I was working with one sibling. And the organization of the system pulled at my WannaBe Organized Inner Self. It was beautiful! But before spending a boatload of money on racks and bins that we didn’t have room for anyway, I wanted to try it out first in a way that took up less space. And we set up our workbox system with banker’s boxes.

And it worked. Sorta. The file jackets wouldn’t stay in the banker’s boxes when you pulled the file folders out unless you made an effort to keep them there – but the younger two never did, they pulled the whole thing out. They weren’t always great at putting them back, either. But they used it, it worked. Over the course of the year the file jackets and the banker’s boxes began to show wear, quicker than I’d hoped, and that was a little disappointing. But again, it worked.

The real crux of the problem hit last year when I saw the light of “Group Learning.” How was I going to fit group learning with the independent workbox system?? Compounded with the dilapidated boxes, needing to find our groove with group learning and wanting to spend more time together…I faltered. I reorganized the workboxes into file crates and gave it a weak try, but I quickly abandoned it and set it aside for a while. Sometime during the second semester though, I got an idea and I pulled their numbered charts back out. I used them with a dry erase marker to assign lessons for the day in a way that they could visually see, and have some independence and incorporate our group learning. It worked well, so this year I created new charts, new tags, and we’re using our new and improved WorkCHART system.

The workchart system is basically a backwards workbox system. Instead of going to a box, doing an assigment and plugging the number on a chart.. in this system you go to the chart, see the assignment, go to the “box,” get the assignment and do it, and put the tag away. Instead of trying to fill your chart up, you’re trying to clear it off. I can use this with group lessons because I put them all at the top of the workchart and after we all do, say, Bible, they all can go to their charts and remove the tags. Once our group lessons are done, they have a variety of individual tasks to complete individually (with assistance from mom as needed.)

I made tags for everything I could think of possibly wanting to do at some point — and I still thought of a couple I forgot! Fortunately I was smart enough to make a few blank ones I can write on with dry erase marker. ; ) Also I decided to use pictures of their textbooks when I could find them, and for most of the others I found free coloring pages I could print and use for my own purposes that I reduced and used (like Minnie Mouse writing  a letter for the “Write a letter” tag – which we use to write letters to pen pals and family members.)

Another benefit to doing it this way is that it takes up less space. I don’t have to have a separate system – bins, banker boxes, magazine files – to organize today’s work in. It all stays on the shelf. Right now our “shelf” is just our file-crates-turned-workbox-turned-bookcase stacked into a square shaped shelf. I want to replace it with an actual wood 4-cube shelf. Just like this, but permanent. In the meantime, this works well. Everyone’s work is in their own box (and one for me.) Everyone can find their own things and return them to their own shelves and it doesn’t take up too much room. In addition to the supply cabinet in the corner of the dining room, it all works and fits nicely. And though it’s always slightly messy.. it’s a lot less cluttered without all the file folders in there, too.

So that’s our new WorkChart system and how we’re using it to organize our school day and get our work done. The kids enjoy it, even the 5 year old can use it. Momma likes it. It’s a win/win. 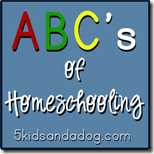 This is a part of the ABC’s of Homeschooling series by Dawn @ 5 Kids and a Dog. You can see the rest of my ABC posts here: 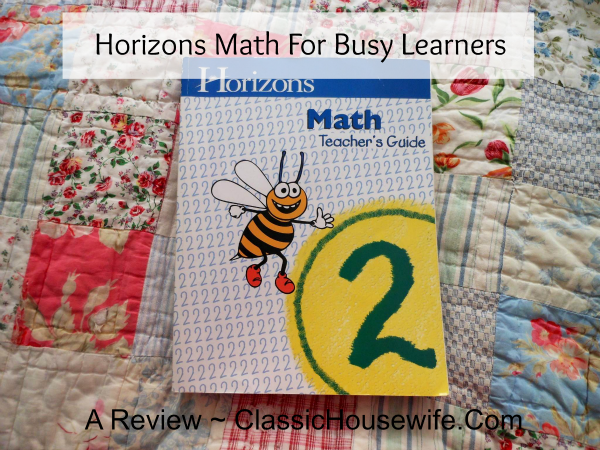 I just happened onto your blog when I googled “workboxes”!! 🙂 And, I believe the Lord answered my prayer tonight… I have been trying to think of some *cheap* interim solution to a bookcase, and your storage cubes on their sides are just what I needed to see!! 🙂 That, and your version of the workbox system… Thank you so much for sharing!! 🙂

I found you blog thru Hip Homeschool Moms. Your post put words to what I have been trying to implement – reverse workbox/workchart system. I already use a chart with subjects the kids turn over once completed. I’m hoping to get the other workbox element working so they don’t need me to find their books:-) Thanks for sharing!

Thanks for sharing this, Amber. We’ve been using the workboxes, but seem to be having issues with using them diligently. Since downsizing our home, we’ve had very little space to have books and such around. The crate boxes actually look like they might work for us! Is there a place on your blog where I can actually print the tags/charts to use the system the way you have it set up? Thanks again!

Author
Amber
Reply to  Jackie B.

I don’t.. I made a list of everything I needed for that first year we started, and then I used an excel spreadsheet to make a “template” with 8 one inch boxes across the top and 11 boxes down. I didn’t use borders so they wouldn’t show up when I printed it. I went and found either a product image of the actual item (for our history and science, etc.) and then for other things like piano practice, I found a free clip art image of a piano. In retrospect, I could have just found a generic free clip art… Read more »