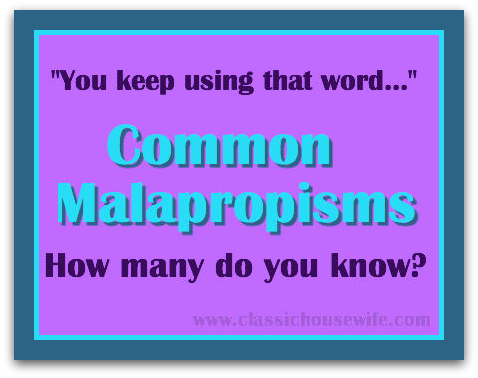 You keep using that word…

Just a fun little post today on malapropisms. Do you ever find yourself reading something, particularly something written by your Average Joe–a blog post, a Facebook comment, and so on– when you find yourself suddenly stopped in your tracks by the obvious misuse of a word or phrase?

Malapropisms: the ludicrous misuse of a word, especially by confusion with one of a similar sound.

Sometimes people do that on purpose, for reaction. (I live with one of them.) But most often malapropisms occur because the word or phrase has been heard and learned by sound, rather than by sight. (Yet another casualty of the decline of reading. It really is true, the more you read, the smarter you are.)

I overlook these things as much as I can.. but there are some that are misused so often that they just *get* to me. I can’t keep quiet on these common malapropisms any longer!

For all intensive purposes…

Say what? You mean all the purposes that were strong but not all the weak ones? Perhaps you mean: “For all intents and purposes” which more or less means “for all practical purposes.”

I could care less…

If you could be able to care less than you do now, then wouldn’t you actually care quite a bit already? Normally people intend to say that they “couldn’t care less,” as if to say that they couldn’t possibly care any less than they do right now, their level of caring is already rock bottom.

Reap what you sew…

I suppose in theory you *could* reap what you “sew,” since you do get to enjoy whatever item you’ve just sewn by hand or machine… however, the saying really refers to process of sowing seeds and reaping the harvest from them later. You reap what you sow. (It’s also often misused.. you sow watermelons, you get watermelons. The same is true with relationships – what are you sowing into them?)

Nip it in the butt…

For some reason this makes me thinking of a dog biting an intruder on the toosh. Though good dogs very well may bite bad guys on the rear end.. that’s not what this idiom is talking about at all! A bud being new growth, the beginning of a flower, to “nip it in the bud” is to put an end to something before it even begins. Like, say, terrible two tantrums. Definitely nip those in the bud.

Do you have a lot of line to tow around with you? Who are all these people carrying lines around and why are they doing it? On the other hand.. to “TOE the line” is to put your toes up right against the line that has been laid out, like a runner with his toe on the start line. (Or like the toddler toeing the line with his tantrums trying to learn exactly where his boundaries are.)

A beckon call sure sounds awfully redundant, doesn’t it? However, to be at someone’s “beck and call” means that you pretty much have to go every time they call. The king’s servant is at his beck and call. (By the way, “beck” is an old shortened version of “beckon.”)

Is it a great, big, stinky mess? (I think I’ve seen a few of those before…) However, that doesn’t make sense in a sentence like, “The construction noise from next door is reeking havoc on my nerves today.” On the other hand, construction noise “WREAKING havoc” would make complete sense. (To wreak = to cause or inflict.)

What thing? This phrase is used as a second half of a sentence: “If you think xyz, you’ve got another think coming.” It’s basically saying, “think again.” Remember that the next time and you’ll remember it’s “think” and not “thing.” Or, you could just say “think again.” ;0)

And now before I wrap this up, let’s discuss a few words and when to use them — shall we??

If you remember illicit and illegal share the same prefix, you’ll be fine! These words mean very different things and I’ve seen some pretty humorous faux-pas from mixing these up!

You just have to remember the difference for this one. But you can visualize having to work out a solution to an equation on a chalkboard if it will help you to remember to use “chalk” when you’re talking about identifying and giving credit to a source for something else. Chalk it up to my visual learning style. ;0)

These two are very close, but there is a difference. I’ve recently heard, “you’re just exasperating the situation” and “it’s very exacerbating for me.” While you might be able to argue that those could *technically* work under the right conditions.. I think we can all agree they’d be better used the other way around?

I often tease my husband when he complains about “scolding hot water.” I’ll sweetly ask, “Is your water reprimanding you?” (He’ll note the twinkle in my eye and retort, “Yes. It’s yelling at me that it’s very hot.”) Remember the old term “scold,” as in reference to scolding a child, and you’ll remember which one to use when.

This is most certainly not an exhaustive list. What would you add? What common malapropisms make you grit your teeth?

In which I attempt to catch up.

These irritate me too, especially “for all intensive purposes.” Haha! I would add accept/except to the list, too. I’ve been known to say “another thing coming” and had no idea that it was actually “think!” Thanks for that lesson! 🙂

I guess, you’re welcome?
Don’t feel bad. While writing this post, I learned that “moreso” is not really a word. =p

I love posts like these! They always make me giggle. (By the way, I don’t know that I’ve ever seen “reeking havoc”. But the thought of smelly havoc was quite fun!)

The two that really bother me are the misuses of loose/lose and pique/peak.

Confession: I have unfriended (is that a word?) people on Facebook because of their inability to use basic grammar. One friend was so bad, even if I could figure the spelling error in the word she used, I still couldn’t figure out the whole sentence.

OH! Pique!! That’s a big one — I can’t believe I forgot about it.
Something does NOT peek your interest. =p

And nothing can “peak” your interest, either. Unless it was once interesting and no longer is. Then, I can say my interest peaked. =)

Indeed!! I’ve seen that one misspelled both ways.

I HAD “faux” and spell check changed it. ARG.

Alex
Reply to  Your Mommie

and wouldnt it be gran’ bat? A grand bat would be rather big wouldnt it?

Sailors; sailors would be carrying line around with them.

I don’t like scolding hot showers or coffee. And, if you studied geology, you’d know that in some countries they rarely drink their coffee hot anyway. And, you should not insensate that I frequently use malaproprisms in hopes of illiciting a response from people.

Whew! I love it! And the new All About Spelling Homophones book creator would be proud of you!