The Biggest Flash Card Deck – EVER. And mastering math as a right-brain, visual learner. 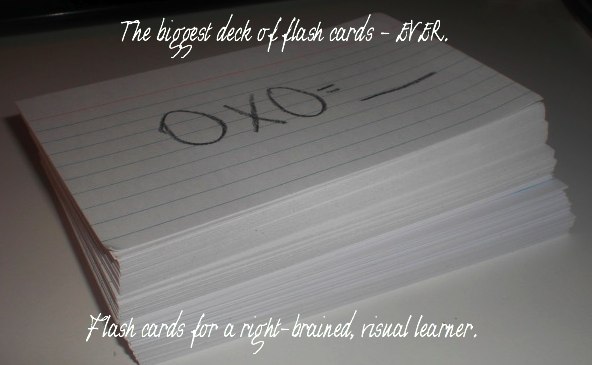 I KNOW how some of you feel about flash cards.. I can *see* your reason, but I’ve never really *gotten* it. Perhaps.. it’s because flash cards appeal to my learning style.

I’ve been even less strict with verbal recitations. You know, like reciting times tables and such. Perhaps because those DON’T appeal to my learning style at all. (I find it incredibly boring, and a big bother in my day to have to go through reciting the entire chart of facts with my children.)

However. (There’s always a however.) Perhaps… If we had been more strict with one or the other (whichever is more appealing to the learning style of the child in question) math facts would come a little bit easier for the girls. They can do them. They know them. But they have to think about them, and sometimes count on their fingers. It doesn’t come easy. And I want it to be EASY for them. I want the girls to be like their Daddy, who has the fastest score on Nintendo Brain Age for computations. He’s unbeatable! I mean.. GOOD GRIEF he’s fast at rattling off those answers! My brain, she is not so fast.

Unfortunately for Princess, she is more like me than her Daddy when it comes to math. She’s right-brained, artistic, visual.. and math is doable but not easy. After doing a little bit of research online yesterday, I landed on this article at the HSLDA website about “Right Brain Math.”

Check out these quotes:

Left brain dominant children learn their math facts easily by repeating them orally, practicing them in timed tests, and working with flash cards. This is the sequential way that works for the left brain, auditory learner. The right brain dominant child, however, likes and often requires a different approach both to memorizing facts, and performing calculation procedures.

When first- and second-graders learn how to add and subtract, they are frequently given manipulatives to aid them in understanding the concepts. Frequently, however, manipulatives are used longer than necessary and become a crutch, so that rapid calculation is unobtainable. Fingers replace the manipulatives, and continue to slow down the process of quick adding and subtracting.

To learn the number facts using flashcards, since the right brain child learns best when he sees the “whole picture,” put the answer on the front of the flashcard, preferably in color. Then have him look up at it, just as he does to learn his spelling words. With the answer on the front, (which left-brainers tend to think of as cheating), the child learns to see the problem with the answer, so that when just the problem is presented, in his mind’s eye he can still see the answer, usually in the color you originally had it. 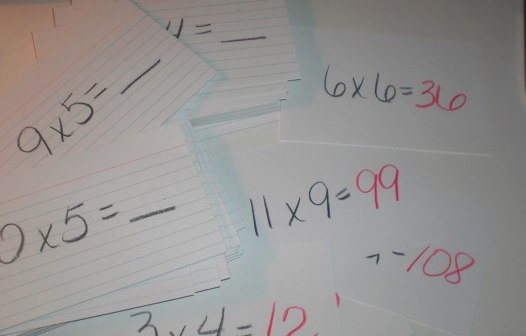 Inspired by this article, using what materials I had on hand, and tweaking the idea a little bit, I sat down to make the most complete flash card deck for my right-brained, visual learner child.

Using a stack of note cards, a red crayon and a black crayon, I started with multiplying by zero and went all the way through multiplying by 12. The front of the card has the equation in black, with a blank line where the answer belongs, and the back has the full equation with the answer in red. Do the math on that– 13 times 13 is ONE HUNDRED AND SIXTY NINE FLASHCARDS!! Double-sided! Princess and I were joking about it later, “Yes,.. with one mega stack of flash cards and only HOURS a day, you too can master multiplication!” ;0)

So how does she use them?

This sounds like a lot of work. Well, it IS a lot of work. But it’s a lot MORE work trying to do long and short division with weak math facts LET ME ASSURE YOU. Princess is on board (even though the stack of cards is a little daunting) because she sees the benefit in the long run. The article on HSLDA also talks about using the Touch Method, triangle families, and word picture stories to help a visual child.

Bonus Points! When I read the paragraph about the Touch Method I thought, “Yes! Yes! That’s exactly what I was talking about!” Just a week or two ago I was explaining Big Daddy how I *see* math in my head – that when he SAYS “7 X 9”, I SEE “7 X 9 = 63” in my mind’s eye. He looked at me like I was crazy, or had two heads. Then I told him about being young and counting dots on the numbers. “DOTS ON THE NUMBERS?” Then he really thought I was crazy. He thought I made it up. “Probably some crazy thing you just started doing, not something somebody taught you,” he said. See – Big Daddy is the left brain, auditory learner. He has NO CLUE what I’m talking about. It might as well be Greek!

Princess is definitely NOT an auditory learner. One of the things I’m trying to do in school this year is make adjustments for learning styles and teach the kids how they learn, how to learn things for themselves in ways that match their learning styles. It just makes sense to do more research on teaching math to visual learners. You’d THINK that math would come easily to visual learners, since it consists mainly of visual numbers on a visual page waiting to be visually completed. Unfortunately, the traditional approach to teaching math facts is largely oral. What I need to do for Princess is make sure that she gets the visual instruction and support that she needs. 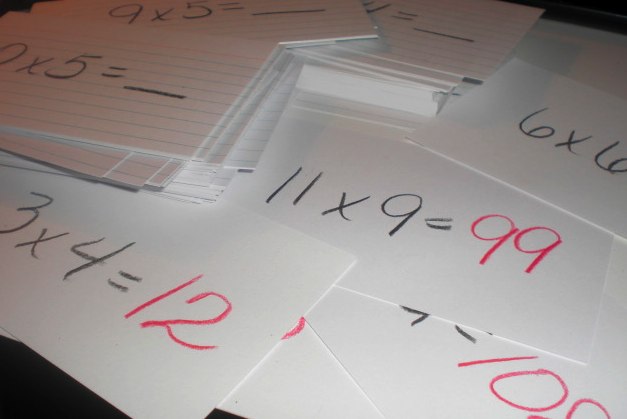 Now Drama Queen on the other hand…. I think she might NEED to recite those addition tables over and over. I need to some research for her!! 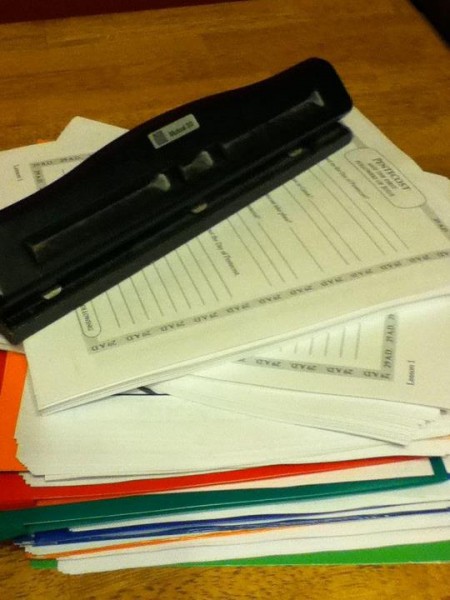 I so TOTALLY remember the dots on a 5 — only a 5, though. No idea why that one sticks in my head, but it DOES!!

I also wanted to chime in here that the ideas of testing frequently (in contrast to studying longer or more often) and re-testing on missed or less-correct items are both currently in favor according to ‘official’ cognitive psychology and learning research — great job to you, Mom! 🙂

Yay! I’m not alone! I remember doing dots for all the numbers. I remember touching my pencil to the points on each number as I added and subtracted, all the way up into 5th or 6th grade!

Great post. I must be a right brain learner. Thank you! I’m not sure what my first grader is, but I may just use this technique for ME for now 😉

Funny thing, the day I read this post I went to our base “freebie” store (called the Airman’s Attic) and told my son he could pick out whatever he wanted. He picked out a “Turbo Twist Math” and it has all sorts of math games, including flash cards that are read out to the kid in addition to being displayed on the screen. Once it reads the problem, the kid can answer or hit the side button and it will add the answer to the end of the problem (as well as read it). You can also buy cartridges to… Read more »

I love your blog. And this idea seams great! I’m going to try it with my kids 🙂