Yesterday found me standing in the rain, collecting garbage from a wayward bag that had gotten lost on the way up the hill to the dumpster and then had the courtesy to spill its trash all over the side of the hill.

Hubs was off on a Sunday afternoon computer call, Little Prince was napping and the girls were given instructions to “be nice” while Momma was outside getting wet and dirty. And then I was off on a trek up the hill in the light rain with nothing but me and my trashbag and my thoughts.

Collecting the trash wasn’t easy – the wind was strong and it kept blowing my trashbag shut or sideways. I asked myself several times why I didn’t think to bring any gloves along with me. And I realized I was wearing my super cute shoes and hoping I didn’t get them muddy. I didn’t, but still it would have been very easy for me to be very cross by the time the chore was over.

Instead, I realized that outside – wind and rain and all – was very quiet. And when you’ve got three kids, silence really is golden.

If you’ve got several children, you know what I’m talking about.

After lugging the bag of trash the rest of the way up the hill I threw it up into the dumpster and turned to leave. But then I stopped and looked over my shoulder.

The day before, Drama Queen had done a science fair project on fossils, most of which had been collected from the area around our landlord’s stock pond a few hundred feet away. My 6 year old is CRAZY into fossils and has been for years. She’s often bringing rocks and fossils to me with eyes wide round open and a grin across her face, “Momma, look at THIS cool rock I found!!” I’m constantly telling her to leave other people’s rocks alone – otherwise our neighborhood churches, restaurants and friend’s houses wouldn’t have any rocks left – they’d be at our house instead.

I confess that I usually nod and say, “yes, yes, now go play some more.” Usually I do look at the rock, but not very closely. I couldn’t say that I really paid any attention to it. I can say that I didn’t REALLY see it the way my daughter did.

But that was before.

I confess that “before” I stopped to pay attention, I wouldn’t have been able to tell a difference in some of the tiny little fossils and plain boring rocks.

But that was before. And this was now. Looking back in the direction of home, I turned toward the stock pond and walked about ten feet past the dumpster where the rocky terrain began. I didn’t have to go far. I didn’t have to look long.

I stooped there for about five minutes, scanning the surface of the ground with my eyes and skimming the surface of the limestone debris with my fingers. Picking up small rocks and turning others over I worked quickly – assessing and discarding, assessing and keeping. My hands flew over the small patch of ground as I collected over a dozen small fossils, including two tiny sea urchins – something we didn’t have yet.

In five minutes. Just off the top of the ground. TEN FEET FROM THE DUMPSTER.

They’d been there all along. Undisturbed. Waiting to be discovered.

I had just never looked that closely before.

I felt so very blessed on the walk back down the hill. And this time I was the one, running up to my girls, eyes wide open round saying “Look what I found!” And I can’t help but wonder what other lessons there are for me in this. How many other details, tiny wonders of God’s creation, little blessings in my day, do I not see because I’m not looking? 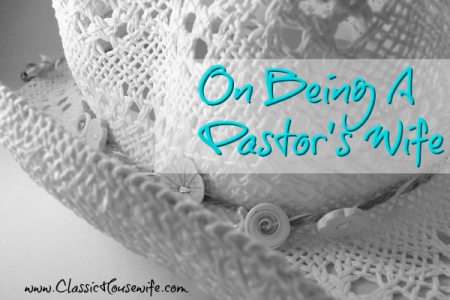 On Being a Pastor’s Wife

And My Only Safety Net Was God…

That is so cool! I lived in San Antonio for 7 years – I remember taking a class trip to this awesome place where we saw tons of fossils and dinosaur footprints preserved in plaster – if it’s still there your daughter would LOVE dinosaur flats!

Kristi_runwatch’s last blog post..What does it mean to be "wise"?

I love this story! And I only have one child, but I know what you mean about the noise :).

This is a great post and I love the layout of your blog, with the sections.