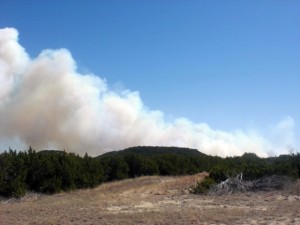 A little over a week ago we had an “adventure” that really rocked our routine. And not just our daily routine…that quickly recovered. But our regular routine way of thinking, our tomorrow’s going to be another repeat of today way of thinking, our comfy and lazy way of routine thinking.

Weekend before last we thought we were going to lose our house, our things, everything but what we could pack into our car,… when a very, VERY, large wildfire came within 3/4 mile of our home.

THREE QUARTERS OF A MILE.

The fire began miles from us earlier in the day and it was just before sitting down to eat lunch that we heard the sirens and saw the smoke. When we were told to evacuate around 4 pm, we had already long packed our valuable things into backpacks and suitcases. Though the wind was in our favor, if it had shifted in our direction we would have been, well.. our things , would have been in serious danger.

I’m not boasting when I say that it was so easy for me to decide what to pack and what not to pack. The calm and peace that I felt MUST have come from God, and I would be remiss if I didn’t thank ALL THE PEOPLE on Twitter and Facebook who were praying for us. I felt it! I was so calm. I made a short list, I packed them, and though it would have been inconvenient and difficult I was ready to let go of the rest.

“God will protect us.”

“He can protect our house.”

“And even if He lets it burn down it will STILL be okay.”

But at that time, by God’s grace, I held it together. We evacuated, we had one car packed full and we had one car to carry us all and we went our neighbor’s house. No, really, our neighbor’s house. I know, that wasn’t very far away. Our neighbor-slash-landlord’s house is on the highest spot of the property and we could see all around us, we could see almost everything. We watched the firemen come and go and battle the fire for hours. We watched black hawk helicopters with big water buckets and a Texas forestry plane dumping red fire retardant. The wind was still in our favor but had the wind changed we had immediate access to the highway, immediate escape available, so we stayed and watched.

It might sound like we really WERE worried about our things, our house, that I really HADN’T let go, but the truth is I wanted to stay with my husband (who was GOING to stay and watch) and I really REALLY felt confident that it was all going to be okay. They were going to get the fire out. They were going to let us back into our house. Soon. Really.

And in the meantime, we talked. We ate pizza. And I assured the kids that it would all be okay. My oldest came to talk to me and ask me questions quite a bit and so we talked,..about how we were fortunate to have been able to pack up early and save so many of our things. About how we had family to go stay with if the fire did take our house. About the firefighters (including my uncle) who were fighting the fire to protect all the homes in our area. About how God is enough and if we did lose our stuff but still had each other we would still be so blessed.

This is deep stuff for a ten year old.

Finally we were given a tentative okay to return home, the fire was largely under control but the firefighters would continue to work throughout the night to keep it that way and put the rest of it out. There was concern, though, about the quickly settling darkness and the risk that the fire would regain it’s strength while returning families were sleeping. So we went back to our house but we left the car packed…just in case.

It should be no surprise that the kids didn’t want to go to sleep, but I told them that Daddy and I were going to guard over them. (And I’m getting all weepy again.) And we did. I stayed up as late as I could. Hubby even later. And finally we slept, after a very, very long day.

And I thought that would be the end. But that was not the end. We learned the next day just how large the fire had been — thousands of acres had burned. But the miraculous thing is that all of the land that burned was field and grass and trees and pastures. Not a single house had been lost. Someone lost a barn. So many houses had been in imminent, sometimes VERY serious danger, but God and the firefighters had protected every. single. one. 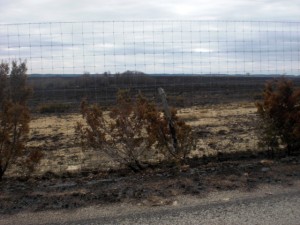 But though it seemed the danger had passed, because of the size there were several hotspots that continued to burn again and again over the next few days. FOUR, in fact. Four days of sirens blaring down the road past my house to the charred remains of fields a mile from my house. Four days of random plumes of smoke springing up in the sky. Four days of wondering, “when will it end?”

Four days to continue to show my children that I trust our God COMPLETELY.

After the initial conversations about how we can trust God no matter what happens, there were conversations about how mercifully and wonderfully God had spared the houses, and protected the firefighters from the dozen counties that came to fight the fire. We talked about how fire, though a danger to us, replenishes the land. We talked about how the rancher, who had started the fire inadvertently while trying to do a controlled burn, was not doing a bad thing by burning his brush, that it had just been a bad day to do it while the wind was so high and the land was so parched. There were so, so many things that we talked about. It consumed our conversation over the whole weekend and on into the early part of the week.

It wasn’t until five days after the fire began that I drove down our road and measured the distance from our house to where the scorched remainder of trees began. Three quarters of a mile. That number makes one shudder.

I am so, so completely grateful to have our home and our things and our routine back. But I’m hoping that we don’t quite so easily slip back into our routine way of thinking, taking everything that we have for granted. Everything, every bit of it, every piece of dirty laundry even, is a blessing. We’re so, so very blessed and I’m so, so very thankful.

Not just because we still have our things, because I still would have been blessed and thankful, but because of God’s peace, God’s provision, and for being able to see it all a little more clearly than I did two weeks ago.

In the end, God did protect us, all of us who were wondering if we’d have a home to return to. And as I said before, I am so very grateful for everyone who prayed for us that day. It is proof positive (as if we didn’t know already) that there is power in prayer. And let me just close with one of my favorite “mantras”..

Does God Want My First or My Best?

He is. I am thankful you are all okay. What an example to leave in your children’s memory.

He is Great and Merciful. I’m so glad no one was hurt and there was no real property damage. What a wonderful example of his love and mercy.

What a great story of faith and God’s peace. Thanks so much for sharing.

Stopping by for the HHH

Reading this really had my heart pounding. We’ve been through many wildfire scares. The most recent was right at 3 years ago on Mother’s Day. They sprang up everywhere around us (suspected arson). I got us packed and loaded our vehicle while running back and forth between our property and several neighbors’ properties keep an eye on the approaching fire, helping get a neighbor’s horses evacuated safely, etc. At about 1am I saw lights swirling like crazy outside and opened our front door to see flames shooting above our neighbor’s 2-story house. I had the kids up and ready to… Read more »