I’ll admit the first thing I thought of was bitter feelings. Except I really couldn’t think of something I was bitter about, because I really don’t hang on to bitterness for the most part. I may feel bitter in the moment but I don’t let it grab hold of me and carry it around with me everywhere I go. (Don’t get me wrong, I’m not bragging, I’m not perfect. I can be REALLY bitter about things in the moment. But then God frees me from that and allows me to hand that over and let it go.)

So the second thing I thought of was vinegar. But that felt like an easy answer. It did however lead my brain to wander to the Crucifixion, with Easter still fresh in my mind, when they offered Jesus something bitter to drink as he hung and waited to die. That led down a path strewn with thoughts about bitterness in general, about how BECAUSE of what Jesus did for me I am ABLE to let go of bitterness against others and extend the same forgiveness.

I actually didn’t take a picture of vinegar though. I thought of another bitter drink. One that I actually LOVE. But only after I’ve stirred in some cream and sugar. 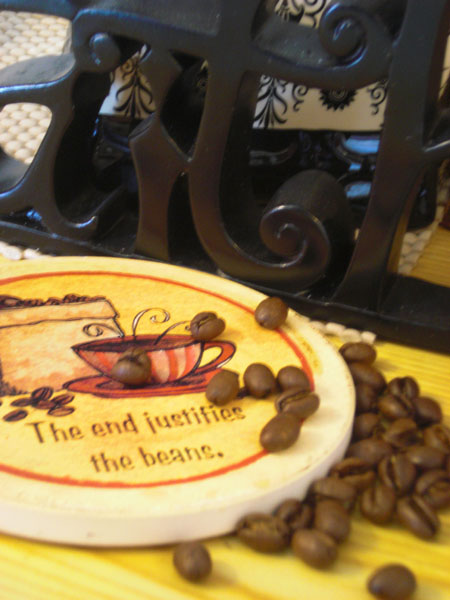 That’s right, it’s my coffee. I love my coffee. And it occurred to me that the coffee bean offers several great analogies.

Think of the coffee bean as your bitterness, something you’re holding against someone, somewhere. NOW CRUSH THE HECK OUT OF THAT BEAN. Pulverize it, beat it up and place it in your filter (repentance). Now add some cool clean water (forgiveness) and push “Start” (AMEN.) Now sit back and let the coffee pot (Holy Spirit) get to work percolating (changing your heart) transforming those bitter grinds into something wonderful (peace.) ISN’T COFFEE A GOOD THING?

The bean in this analogy represents bitterness again. But this time the bitterness and sadness those around Jesus felt during the time of his crucifixion. How hard it must have been to watch. How hard it must have been for Christ in his human form to put one foot in front of the other in his bruised and beaten state. How horrible a thing it was! But it was NOT the end. It was a BEGINNING. A new life in Christ, a new relationship with God, a new beginning. God took something that LOOKED so bitter and horrible but when he was done with it — what a sweet and joyous thing! MORE sweet and joyous than coffee… analogies can only hold true to a certain point and then the truth must take over and stand on it’s own.

P.S. The black word plaque in my photo says “Faith” and the black and white thing behind it is my Boleyn Scentsy Warmer.