A hard winter makes for a smaller insect population in the summer, or so the old adage says… HA! says I. HA!
This past winter was a GOOD COLD WINTER. Well, as far as Texans can HAVE good cold winter. We had more snow than we’ve seen in years, and yet here we are creepy crawling with bugs all over! So much for the old saying.

At first I thought that I was simply noticing more bugs, paying more attention thanks to my little boy who is really into bugs right now. But as we have found more and more and MORE bugs inside our house and on our back porch I started thinking: “This isn’t normal!” And guess what? It’s not.

We’re having a bug surge this summer. 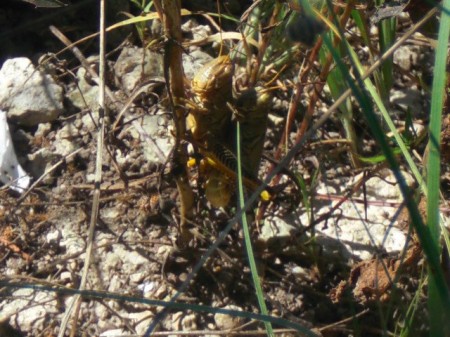 We have seen more grasshoppers than I care to count. They. Are. Everywhere. It makes me think of the plague of locusts, just sayin. Fortunately, grasshoppers don’t sting or bite. Though they CAN be quite annoying when one finds its way into your adjoining master bath and SINGS. ALL. NIGHT. LONG. Ask me how I know. 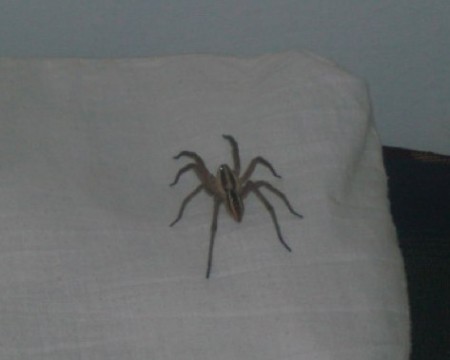 We have found (and killed) 7, or 8, or 9 (I’ve lost track) wolf spiders in our house this year. In the previous 5 years we’ve been here, we may have found 2 or 3? At the most. Normally the rule is “Outside: You’re not my problem; Inside: You’re toast.” This year I’ve even squashed a few on the back porch. I figure, there’s obviously plenty. And the back porch is too close to “In the house.” The creepiest one –aside from the one on my bed IN MY BLANKETS– was a few nights ago when I saw something like this (see video below) on the back porch, only it was dark and the yellow porch light didn’t illuminate it too well. It just looked like a funny looking spider until I squished it — and hundreds of teeny spiders started WOOSHING away from the dead Mommy spider and spreading out across my porch. EEEP!!!

WARNING: This video may give you the heebiejeebies!!!

Ok, I’m better now. Except I keep feeling like things are crawling on me.. 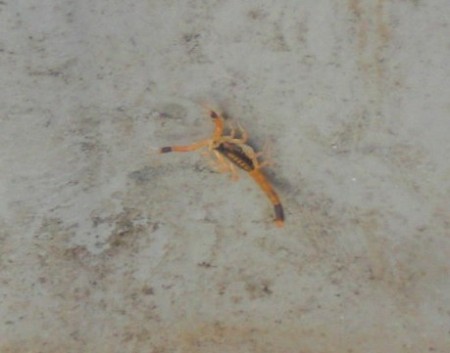 SCORPIONS. Need I say more? I’m so creeped out by scorpions I really just want to move on. We’ve killed at least half a dozen inside and outside the house. STILL…that’s not our highest scorpion record. Once a few years ago, with a sudden rash of rain storms chasing bugs inside in the middle of the summer, we found five in our house in a week! That’s one record I don’t want to beat.

Flies. Maggots. No pictures of maggots for you. I will spare you. The beginning of our summer was AWFUL with flies and we had a horrible fly/maggot problem in our kitchen. I had to take my trash out Every. Single. Day. Or they’d lay eggs in the trash can (even with hardly any food trash in it!) and two days later we’d have maggots crawling across the floor in our kitchen. I wanted to cry. Believe it or not, a trash can with a lid and a sticky mouse trap got that problem under control. The flies would land on top of the lid and get stuck to the sticky trap. Yay for sticky traps! 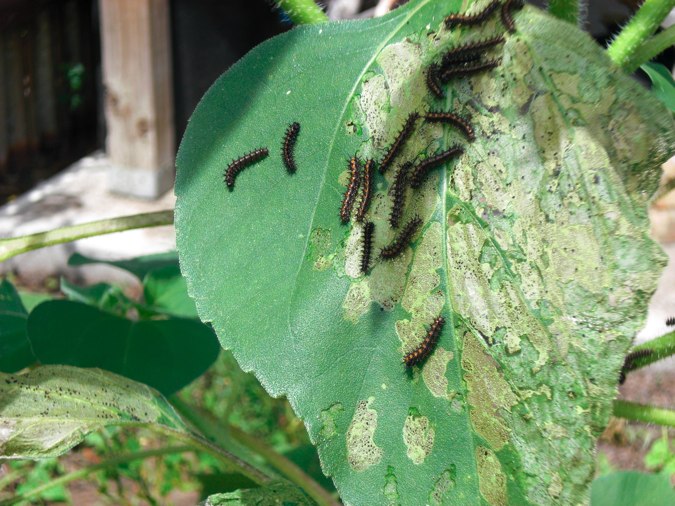 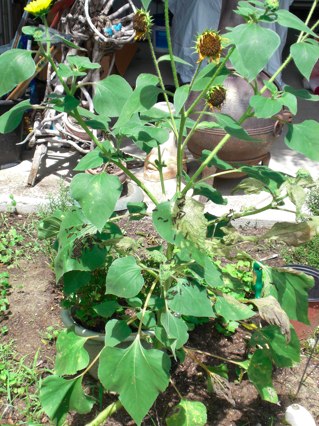 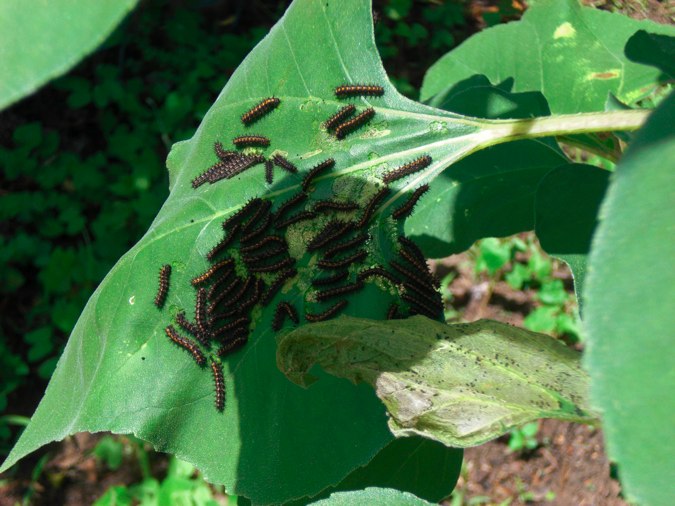 You probably already know that we have found (and tried to feed and grow) several caterpillars this summer. But what you may not know is that before this summer, I never really noticed any! I was amazed when we went to my Mother-In-Law’s house and saw this sunflower “weed” COVERED in tiny caterpillars. On top of and under every huge leaf, devouring the entire thing! I don’t know if they were going to be butterflies or moths, but I bet when they all grew up she had a ton of one or the other buzzing around her yard. 😉 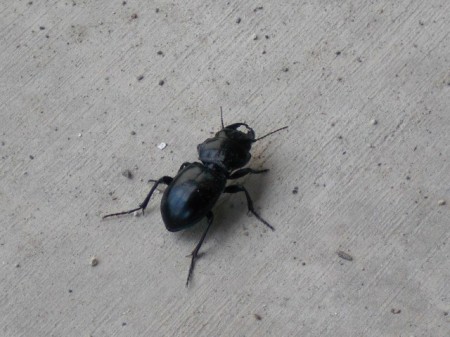 Beetles? Okay, the beetles are new. We just saw these. Maybe I can’t include them because I haven’t seen TONS and TONS. But I’ve never seen any in our yard before. And then I find two on the porch. So that counts, right? 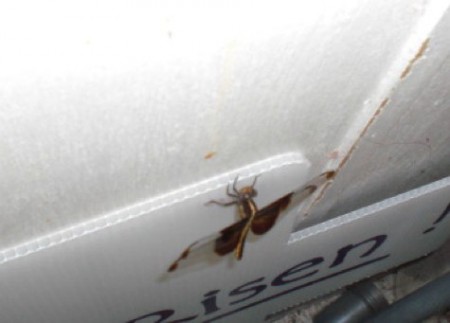 Oh my word the dragonflies! They have always been big swarmers on summer evenings, but the air above our yard has just been FULL of them every sunset. They circle and circle around. One flew in our house and I tried to shoo it back out, but it landed between our washer and the wall! I finally did get it to crawl onto the broom and I released it outside. What? It’s a dragonfly, it doesn’t harm anything right?

We have also had wasps, bees, yellow jackets and muddobbers coming out of our ears. And when it rains: mosquitos. And also, ants. Good grief.

The only “good” thing that comes out of our bug surge is that we get to look things up and learn about them. My little boy is FASCINATED by the grasshoppers and dragonflies. I’m just ready for the wasps, scorpions and spiders to go away. Because this? This is definitely not normal!

This week’s Popinjay photo prompt was “Abnormal.” I have several! For more Abnormal, visit Michelle. No, wait, that didn’t sound right…. 😉

Come, Shoot the Breeze With Me!

I was good with the grasshoppers. But Lordy friend…you got to the spider? I skipped way down. I hope you didn’t say anything important because I could read it. ACK. I’m totally, abnormally (ha!) fearful of spiders.

I hear ya! I don’t like spiders, or the scorpions, or the wasps… and we’ve just had SOOOO many! Eeep! I assume you didn’t watch the video either. OH MY GOODNESS that gave me the heebie jeebies! That woman is much braver than I am to hold a wolf spider. Or crazier. Or both!

The scorpion pic brings back memories! I grew up in Texas, and we used to see them all too often. I got stung once on the finger when I was 16 and literally thought I was going to die. Lord have mercy. But He has given us the power to tread on scorpions and serpents. I realize the scripture is speaking to the spiritual rather than the carnal/physical, but I *know* we have dominion. Large spiders still really gross me out *shivers*

EWWW, ewww, ewww, ewww…my whole body is all itchy and I’m completely creeped out. Thanks for sharing AMBER! (I really really hope my sarcasm comes across in my words). 😉

Shones – I have been very fortunate so far, and though I’ve found many I’ve avoided being stung by a scorpion. I hope I can keep it that way. 🙂

Karina – LOL! I guess my work here is done. 😉
Just kidding – I felt the same way the whole time I was writing it!!

Ick! I can handle other bugs. But I can’t handle spiders. I don’t know why but those suckers scare the crap out of me. LOL.

Now I’m all itchy and creepy. I need a shower. The spiders have been ABNORMAL this year, you’re right! Mosquito population was down, spider population up. Is that cause and effect? And what caused it all anyway?

Elaina – Me too, me too!! Only, I feel that way about SEVERAL kinds of bugs. 😉

VSliker – I don’t know what caused it — all I know is that I have BUGS everywhere! Eeep!