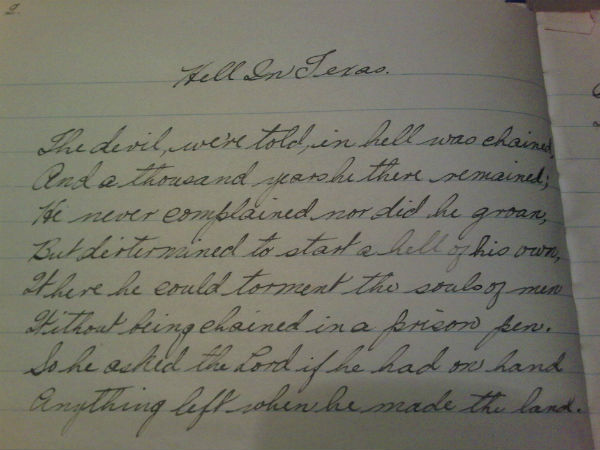 I have a real treat for you today. (Well, it was a real treat for me!) Last weekend we found my great-grandmother’s poetry journal from high school in amongst a box of old (also delightful) pictures. After digging further, I think it was a combination copywork and poem composition book – with some original and some copied. It was so neat to flip through, read her poems, and admire her lovely penmanship. (Penmanship is something of a lost art these days, don’t you think?)

This poem is called “The Ford” and the earliest reference I could find is a book called “Funny Stories About the Ford” dated 1915. My great-grandmother’s version is slightly different, and I found TONS of variations on the internet, many of them claiming to be written by relatives. I wonder if they, too, found a composition book and assumed it was an original rather than a copybook? 😉

At any rate — I wanted to share a couple of pictures and poems with you here, but you can find the rest of my journal entry at iHomeschool Network, because today it’s my turn to write for the hop! So hop on over and check it out!

You are so right! Penmanship is quickly becoming a lost art! Good for you for trying to write more and for encouraging your children to do so, as well. 🙂 My kids also love Times Tales! My 8 year old daughter learned them just from being in the room when my 10 year old was watching the videos! She just loved them as much as he did! Have a great weekend! Many blessings, Lisa

I’ve seen that, too… the six year old is watching the videos with the 9 year old and picking up the stories. =)

Wow, her penmanship is gorgeous! Hmmm…sweet memories are held in the handwriting of a loved one….and sometimes laughter! Thank you for sharing!

Thank you, she always did have lovely hand-writing. I have a bible she gave me when I graduated high school, inscribed at the front. She grumbled that it was going to be the last thing that she wrote because she was dissatisfied how shaky her writing was becoming. =)

The penmanship is amazing. I wish I could write that beautifully. Sadly penmanship is an area I feel I have failed in teaching my children well. What a find to treasure for years to come.