We all have our different strengths and weaknesses…and for some of us mercy comes a bit easier than it does for others. (Some of us struggle with it quite a bit.) It’s been a long time since I’ve taken a spiritual gifts test so I thought I’d take one and see where I ranked on the gift of Mercy before writing this post. Well, I took three and got three very different sets of results. Figures, right? But on two out of three I had fairly decent scores on Mercy. That doesn’t surprise me because I like to give people the benefit of the doubt, look for the best in people, give people second chances, and empathize with their point of view.

You may recall that we’ve already defined Mercy as “not seeking the punishment one deserves” and that it goes hand in hand with Grace, “a kindness not deserved.”

I have to confess though, I may be semi-decent at extending Mercy but I’m not really all that super great at it. It wasn’t one of my top strengths. Typically, it’s not an issue with the MERCY as much as it’s an issue with anger, impatience or something else that’s tripping me up.

What I mean is: I know in my head that I should let some things go for the sake of my marriage. Sometimes the issue at hand is not worth pursuing. On the other hand, I find it really hard to bite my tongue and back down from a fight  — so even if we’re just talking about a shampoo bottle I’m going to find it difficult to not accept an invite to an argument when the gauntlet has been thrown down. Sometimes what I know in my head and what I pull off in action don’t line up very well. My husband may be picking a fight, he may even be wrong, but that doesn’t mean I need to ride in on the justice train.

Moving from lesser things like shampoo bottles, we can see how this is true in more important things like “blame games.” Especially for overly defensive people like me,.. if you’re going to try to throw the blame on me for something I didn’t do I’m going to rise to that challenge with full force. Now, I’m not saying you shouldn’t speak up — but there’s a difference between speaking up and going three shades of crazy. It will only make matters worse if I think that the person blaming is actually the one at fault. Seriously. Not only do I want to vindicate myself but I have to fight the urge to make sure the blame lies squarely on the offender. Of course that’s all kinds of wrong. There’s a lot that goes into refraining from doing that and one part is being merciful – not seeking the punishment on the other person.

Let’s look at some specific ways we can choose Mercy with our husbands:

1.) Don’t assume that a slight was done on purpose. Give your husband the benefit of the doubt.

My husband is very forgetful. Sometimes it’s easy to think that he just ignored something but getting angry before I even ask him about it just puts my heart and mind in the wrong place before we even begin.

Proverbs 3:30 Do not contend with a man for no reason, when he has done you no harm.

Proverbs 14:29 Whoever is slow to anger has great understanding, but he who has a hasty temper exalts folly.

2.) Don’t hold grudges for intentional slights. Call it out in love, forgive and move on.

Sometimes our husbands may actually be doing something on purpose: trying to pick a fight, trying to make a point. They’re human, too. Getting angry only ruins my ability to reprove biblically and in love. The best response I can have is to calmly say it like it is, “I think you’re trying to pick a fight and I’m not going to fight” or “You did that on purpose and that’s not okay,” and then walk away or move on. I’m serious, it may sound simple or awkward but I do this all the time and it’s much more effective (at least for the condition of my own heart and sin) than getting angry and yelling back (which I also do way too often.)

Matthew 18:21-22Then Peter came up and said to him, “Lord, how often will my brother sin against me, and I forgive him? As many as seven times?”Jesus said to him, “I do not say to you seven times, but seventy-seven times.

3.) Don’t accept an invitation to argue. Pray for peace and wise words.

Just because someone invites you to a fight doesn’t mean you have to join in. Sometimes it’s hard! Maybe they really did do something wrong. Maybe you really do need to stand up for yourself or someone else. Arguing and getting angry solves nothing. Pray. PRAY, PRAY, PRAY. Do whatever you can to avoid active fighting and seek calm, wise words instead. When we allow ourselves to get caught up in that automatic defense response we usually end up hurling fire and brimstone down on the other person. Whether they deserve it or not isn’t the issue. Keeping our hearts clean and seeking what’s best for our marriage is the goal.

Proverbs 10:19 When words are many, transgression is not lacking, but whoever restrains his lips is prudent.

Proverbs 15:1 A soft answer turns away wrath, but a harsh word stirs up anger.

Does who started the fight or whose fault an error is REALLY matter in the long run? Why do we want to store up scores of records on what was whose fault and when? The bottom line is that being married is a union and that puts you both in the same boat when something comes up. If the bank account is overdrawn, if the spare tire is missing, if important papers didn’t get filed… it affects both of you as a unit. The better focus of our time and energy is working together and solving the problem, but that’s not always our first response. Too often we want to figure out whose fault is is and blame the other person. (We haven’t come very far from Eden, have we?) We just have to remember that in the end it doesn’t matter – Adam and Eve were in their mess together, and so are we.

Proverbs 19:11 Good sense makes one slow to anger, and it is his glory to overlook an offense.

Proverbs 12:18 There is one whose rash words are like sword thrusts, but the tongue of the wise brings healing.

5.) Take a minute to see it from their point of view. You may be surprised.

One big thing that’s very helpful in extending mercy toward the other person is taking a minute to see their perspective. Maybe things were misunderstood, maybe they’re under a lot of stress, maybe they’re feeling discouraged. The conflict at hand may not be all about YOU after all. I’m always very humbled to realize that there’s something bigger going on and that I’ve made it all about me when really what my husband needed was love, encouragement and helpfulness. Looking at it that way makes it a lot easier to overlook careless thoughts and words, forgetfulness and mistakes, and so much more. What my husband needs in that moment is not a verdict, he needs my mercy.

Proverbs 15:28 The heart of the righteous ponders how to answer, but the mouth of the wicked pours out evil things.

James 1:19-20  Know this, my beloved brothers: let every person be quick to hear, slow to speak, slow to anger; for the anger of man does not produce the righteousness of God.

When we love the other person as we love ourselves, and treat them the way that we want to be treated, it’s a lot easier to extend that mercy and grace to them. You can overlook obvious attempts to start fights (go ahead and call it out, “I’m not fighting with you today, honey,”) and you can avoid throwing blame back at the other person (“Let’s not argue about whose fault it is and work on a solution,”) and you can just let things go (“Whether or not he did that on purpose, I’m going let that one pass.”) We have to actively CHOOSE not to seek vindication for ourselves and consequence for the offender but to seek unity and restoration instead.

I know this was long. I think this important, though. We have to believe that we are on the same side as our husbands and that’s it worth the fight to make it better and make decisions for unity over self. It’s not me against my husband, it’s my husband and I together against Satan and the world. We’re on the same team. That means it’s much more important to seek wisdom, restoration and growth out of a conflict than it is to seek justice, retaliation and vindication. One builds, the other divides. Mercy is one of the tools we use to build up our marriages.

What does mercy in your marriage look like for you?

If you would like to join in, the rules are simple. Link up an encouraging post about marriage with the direct url to the post. Next week’s word is “Nurturing” Join us then for more Marriage Monday! 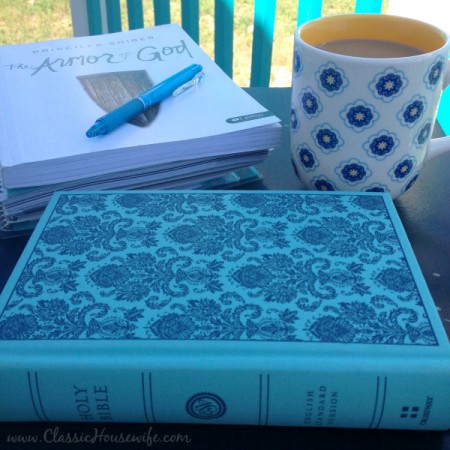 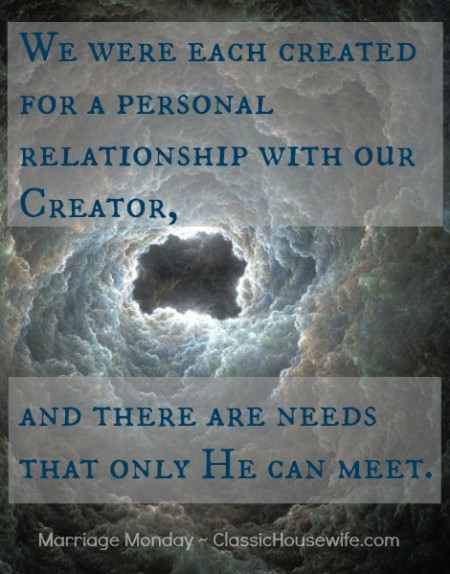 My Husband Can’t Be Everything I Need