I’ve Got Math On The Brain…

With all the talk about finding the right math curriculum for Drama Queen, I’m starting to look at Princess’ math curriculum a bit differently, too. I mean..WHY do I have Saxon Math, specifically? 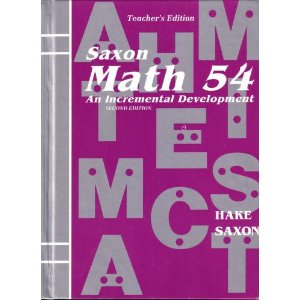 Okay, I can tell you WHY. Because: 1.) The 1st one was free, the 2nd one was cheap, the 3rd one was free… and 2.) Because it’s what I grew up with in public school, I’m familiar with it, and I like the repetition and review.

Maybe I shouldn’t ONLY be looking at which one is the cheapest? What I mean to say is, Princess has the most difficulty with math (it’s her highest scored class but it’s hard for her and she spends 2-3 hrs on one 25 problem lesson!) so it would make sense to make sure that we have the curriculum that would suit her learning style and ability the best, no?

For example, while comparing Horizons and Lifepac (from Alpha Omega

) for Drama Queen, it was pointed out to me that Horizons is structured similarly to Saxon, in that you learn a new concept and then each lesson features a few problems from your new concept and your previous concepts, giving you several different skills to work on all at once in every lesson. Whereas Lifepac, on the other hand, focuses on a main concept or two for an entire section and then moves to another. And when I read that… it was like my brain started spinning.

1.) Horizons is being recommended to me for my student who is BETTER at math, because of the way it is structured… I have a student who is NOT better at math, on a similarly structured curriculum.
2.) Princess *knows* the material but isn’t very strong in each of the concepts…Lifepac spends more time on each concept before moving on.
3.) Maybe Princess NEEDS a curriculum that is structured COMPLETELY different than what she is doing now!

And I can’t stop thinking.. I won’t know if I don’t try it! And.. it couldn’t hurt! And.. WHAT IF SHE DOES BETTER AND STOPS HATING MATH WITH THE RIGHT PROGRAM?

I know. That’s a lot of what ifs there. BUT. There’s good news because I can test that theory..without spending another penny!!

Princess is using 5th grade Switched on Schoolhouse right now – also by Alpha Omega – and a 4th grade Saxon Math book because she was able to advance in everything else but not needed to stay where she was on math. So I installed the SOS Math but didn’t assign it to her, waiting until she finished the 4th grade math before moving on.

But today… today I started opening lessons and looking at them to see how they are structured. And guess what? Each unit focuses on a couple of main concepts- Eureka!

And it gets better. I compared the last portion of the Saxon 5/4 math book and the first few units of the SOS 5th grade math and it’s nearly the exact same material. If she were to stop where she was in the Saxon book and start using the SOS.. she wouldn’t skip any material. The only thing holding her back is that if she were stronger on her times tables then she wouldn’t get bogged down doing the more complicated multiplication and division problems the first unit begins with.

So I’m tempted. I am SO tempted. I am 99 percent sure that I want to spend two weeks working only on times tables (HELLO TIMEZ ATTACK!) and then start using the SOS curriculum we have. It CAN’T hurt to try a different approach and see if it’s any better! And if it’s not, then we can try something else. (I already know that if we don’t like this, I’m considering trying Teaching Textbooks next!) Bottom line, I think we NEED to find the one that is the best fit for her. Don’t you??

I use affiliate links for Alpha Omega and Timez Attack. We use both and love them!

More About Blogging for School and Writing

We use Lifepac and LOVE it. We’ve been needing to focus on memorizing the times table, too, but instead of spending two weeks straight on times table alone, I had him do the regular assignments and then did one number at a time before and after the school day. We did 2’s for a couple days, 3’s a couple days, etc…and spent more time on the harder numbers. Seems to be working!

Change it! Just do it and make it better for both of you!

Yeah – she’s good pretty good on her times tables up to 5’s or 6’s and then she starts calculating it in her head instead of remembering. We’re going to be spending some time with mom for several days, so instead of trying to do a lot of school, we could just focus on that and see how much faster and better she can get it with extra practice. I really don’t want to start her on the new one without a little bit of extra practice, though, because it started with multiplying two digits times two digits, and all… Read more »

Oh! And side note.. I’d already tossed the notion around in my head of trying LifePac for 6th grade and seeing if we like it better than SOS or the other way around. We LIKE the SOS.. but I have always been drawn to the LifePacs! It’s just never been in the budget before. And with the SOS, it’s reusable for the other two kids. But those LifePacs! 😉