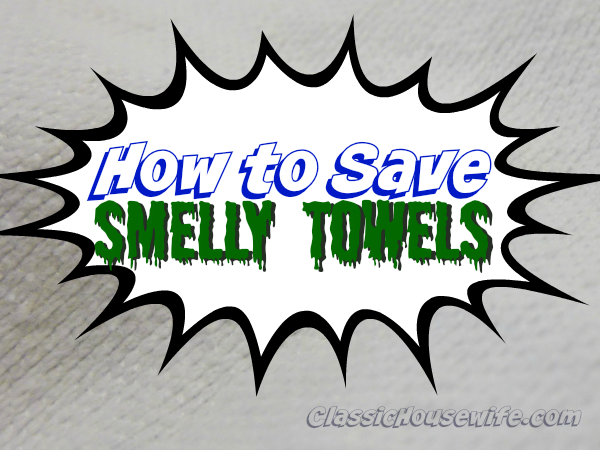 How to Save Smelly Towels

Why do towels get so smelly?? You dry off your clean body with them–so what’s the deal??

Apparently, it comes down to the water.

See, when moisture gets left inside of fabric, bacteria breeds. And when bacteria breeds, it stinks. And because the main purpose of a good towel is to act as a fluffy skin squeegee, it deals with moisture all day long.

One of two things happens:

It only takes one time for a towel to get dropped in the hamper damp, or for a load of towels to be put away only 99% dry for bacteria to get a foothold in that towel!

Guilty as charged!! My kids are notorious in our house for not hanging towels to dry, or not hanging them the right way. And since my washer can hold slightly more than my dryer, I’m guilty of occasionally overfilling the load.

Next thing you know, your towels smell strong enough you’re certain they are going to grow feet and walk away–probably with the goal of strangling you in your sleep. Or something.

The Funk Gets Worse

Once The Stink sets in, people are reliably predictable. What do they do? Those that don’t know better will wash the towels again – this time with extra soap and softener. It makes sense. Extra stink = extra soap.

Guilty again!! And guess what? That’s wrong! When you add the extra soap and softener, the towels don’t rinse cleanly, and the residue left in the towels allow more dirt and bacteria to get stuck in your towels, even though you just washed them. Deceivingly, they come out of the dryer smelling okay.

Next thing you know, the towel you are using to dry your clean body smells worse than a teenage boy’s feet when the towel gets wet.

Whatever you do, don’t wash it with extra soap and softener again, you’re on a spiraling path towards TOWEL DOOM. There is, however, one way to save those stinky towels from towel death. And unbelievably, my husband is the one who found it!

Important: Make absolutely certain the towels dry completely in the dryer! Dry on the highest setting and if in doubt, turn the dryer back on for an additional thirty minutes to make sure. It does take a long time to wash a load of towels this way but it WORKS.

Now that you’ve saved your stinky towels, you need to prevent this problem in the future. It’s simple really:

This should keep you on the path to clean, happy towels, but should you stray back into Stinkyland, you know what to do. It’s inevitable that a pool towel will get left in a bag, or a towel will slip off the bar and sit in a pile overnight. Now that you know how to properly wash those towels, you can head that problem off at the pass.

One more thing: I noticed a similar problem with some of our oversized blankets. I suspect they didn’t dry well enough in the dryer and the same thing occurred. Washing them with this treatment completely fixed the funk. Our bedsheets never really got stinky but they didn’t really smell quite as clean as I’d like either, with all the sweating and body odor and dead skin cells the sheets have to deal with. Washing the sheets this way makes the sheets smell better than ever.

I’m going to keep this in mind for when the son gets older. I bet this would work wonders for stinky teenage boy socks and shoes, too. 😉

Yes. Oxygen bleach. Oxygen bleach is going to be composed of mainly sodium carbonate (aka washing soda) and/or sodium percarbonate (breaks down into hydrogen peroxide and sodium carbonate when added to water.) Both of these ingredients are great natural cleaners that won’t bleach your clothes, and are popular in natural and green cleaners. They work well for stains and to kill bacteria.

OxiClean is the most popular brand, but it also contains surfactants and may contain added fragrances (depending on which you buy.) Another brand, 7th Generation, also contains sodium sulfate (mineral-based processing aid) and sodium silicate (mineral-based alkalinity builder), but no additional chemicals or fragrances. So read the labels and Google the ingredients and choose the one that’s best for you.

Do you have a favorite crockpot or oven breakfast?