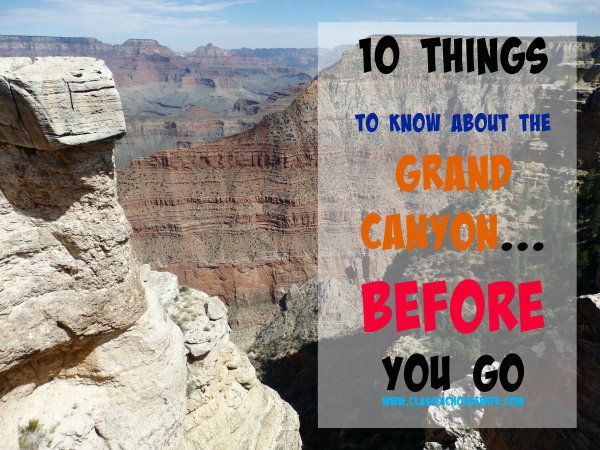 Quick – what do you know about the Grand Canyon??

And I’m assuming that if you were to travel all the way over there to see it,. . . that you’d actually want to SEE IT,. . . rather than, say, “hypothetically,” arriving, finding the ladies room, leaving, and using the Grand Canyon as a great big rest stop? Right? Hypothetically. I mean, who would want to do THAT??

What we didn’t know when we headed to the Grand Canyon kept us from actually seeing any part of the natural wonder so big you can’t miss it, so big you can see it from space. (Well, the first time, anyway.. because you better believe we came back the next day to see it for sure!)

Ten Things to Know BEFORE You Go To The Grand Canyon

And yes, there are two ways to get in.. one on the east end, and one on the west end. Also, when you look at the map on the trip planner, you will notice many view points along the highway between the two.

If you’re trying to plot an arrival destination into your iPhone so Google Maps can get you there, and you are really just kind of passing through and only want to spend a couple of hours there,.. this can be quite confusing!

Also, when you go to see the Grand Canyon you may not actually want to see THE WHOLE PARK. If you want to visit the part of the park with the Visitor Center, gift shop, etc, then it will probably make a difference, which entrance you want to use.

2.) Google Maps (when approaching from the East,) will naturally want to take you to the east entrance,…BUT THAT WOULD BE WRONG.

So where, in the world, EXACTLY, are you supposed to go?

Let me tell you. The entrance on the west end is actually the main entrance, the one that you should use. That entrance brings you right on in to the parking and the Visitor’s Center, and all the information you are looking for. Also– the drive is much easier on the stomach!

Which leads me to information point number three…

3.) The east entrance to the Grand Canyon National Park is very, very, mountainous (and probably very pretty, I assume.)

If you are unused to mountain driving–steep, curvy, twisty, cliffy, belly-floppy roads… you may not want to take your first mountain roads driving up into the east side of the Grand Canyon I’M JUST SAYIN.

What we saw before the sun went down was fairly pretty. Some of it was also very nerve-wracking! Racing the sunset up the back side of the mountain is enough to give you gray!

We were already running behind on our day, and because Google Maps brought us in from the east, it added almost an hour to our drive time. By the time we got into the national park the sun was going down.

And since we came in the “wrong end,” after we got into the park we kept driving and driving and wondering “where is the visitor center??” About 25 minutes later, pitch dark, we found it (at the other end of the south rim drive we’d been driving.) We parked, we found the public restrooms and… we left. *cough, cough*

4.) Grand Canyon park passes are good for a week!

And that’s a good thing, when you find yourself arriving and paying at nearly sunset and then realizing you aren’t going to be able to see anything before the sun goes down. At $25 per vehicle, it’s already a really fair price. The fact that we had already paid and could get back in the next day was a big factor in our decision to stay in Arizona another day and make a second attempt at seeing the Grand Canyon. Yay for 7-Day passes!

You may be wondering how we even got IN to the Grand Canyon if we got there so late? Wasn’t it closed??

Well, yes and no.

The park itself really is open 24 hours. There are self serve ticket machines that take your debit card, spit out a ticket, and raise the security arm to let you in. Boom! You’ve made it in to the Grand Canyon National Park!

Now, the Visitor’s Center, Bookstore, and all the other services…  yeah, they clock out and go home at a certain time. And honestly, I can’t even tell you what time THAT IS. The websites do not have specific hours listed. It says the hours change by season. Well THAT’S helpful, right? I do think I remember seeing hours posted on the doors to the different services but I really can’t remember what they said.

So now I’m not any more help than the website is, am I?? It’s probably a safe better if you get there before 5 though, and not around 7. 😉

This post is getting really long. Now, I don’t really want to leave you hanging, but believe me, it’s for the best. And the BEST bits are yet to come. Plus, I have more pictures from our visit. So I’m going to post the second half in two days, okay? When I do, I will link it here. Our visit may have gotten off to a rocky start but it all worked out in the end. =)

I went to the Grand Canyon for the first time last summer. We did a two-day trip. We arrived in the late afternoon/evening and stopped at the first overlook from the east entrance, then on to the other end to the little geological museum and overlook areas. We went the next day to hike. It was fun. A comment on the east entrance to the park: I thought it was a beautiful drive! Yes, there are some steep climbs, but it wasn’t all that twisty. I get CRAZY SICK on twisty mountain roads (I even get sick in the Texas… Read more »

Thanks for the input! I do think doing it at dusk was part of the scary factor. And my mom (who was driving) kept saying “Look over there!” And I kept replying, “Look at the road!” ;0)

If You Want To Visit The Grand Canyon (And you know, SEE IT.) Part 2 » A Classic Housewife in a Modern World