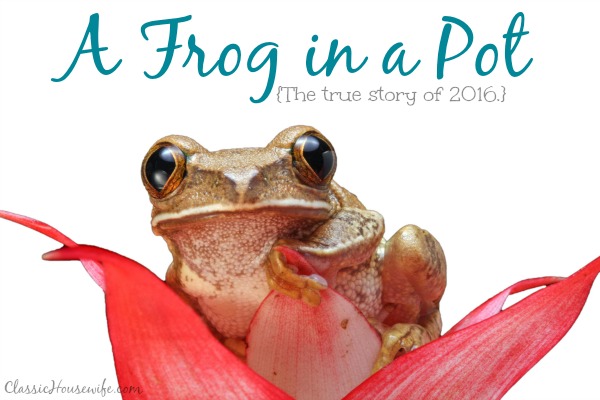 I saw that a lot at the beginning of this month, and I concur. It WAS hard. In many ways.

I was the frog in the pot, with the rising heat and pressure, not identifying the obvious problem staring me in the face.

It all came to a head in May, though, with a quadruple convergence of four huge events back-to-back.

The girls had a dress dance rehearsal on a Friday night, and my oldest had her violin recital on the same night at the same time. The week was full of extra practices for both, and then Friday night we pulled off a Houdini act at the violin recital, arranging to have Catie play at the beginning and then disappearing immediately after. After a quick change in the restroom, we rushed across town to the dress rehearsal, the girls missing one of their dances and two group photos (since the photographer was taking group shots during the dress rehearsal.) The next day was a little less stressful, but still stressful as the dance recital came and went.

It all worked out in the end, but there was no rest for this Momma because the next weekend held our homeschool prom on Friday and a kids carnival at church on Saturday, both of which I was deeply involved in planning and running.

During the week there were final planning meetings, shopping trips, decorating days, and last minute role-changes when two of our prom committee members ended up with immediate family members in the hospital. The prom was a huge success but as you can imagine we were hopping all day long, constantly busy during the prom, and we stayed out really late cleaning up after. I was up at the church fairly early the next morning to do the same thing for the carnival. As soon as I sat down afterward, I conked out.

With the bulk of the crazy-busy behind me, you’d think I would have been fine at that point, but I was still the frog in the pot.

It happened the following Wednesday when I had a breakdown at one of our regular operational planning meetings at church. I snapped and came unglued, I bled stress and ugly all over the place. My husband was disappointed with me and I had to apologize to people later.

I immediately withdrew and regrouped. We took school off for the summer. We planned family time together. I let go of anything I could release, and continued to purge things over the summer.

I felt some relief from my to do list but I still hadn’t yet fully kicked the depression to the curb. It was annoyingly persistent, coming around and around again. Oddly enough, I wouldn’t really find freedom from that until I learned that two of my friends were also struggling with depression. It wasn’t until sharing my own struggle with them, and each of us spending some time praying for each other and committing to make time in God’s Word each morning, holding each other accountable, that I would finally break free.

THAT is the power of prayer and the strength found through being sisters in Christ.

Before I was ready for it, Summer Break was ending. I’d have liked more time to heal but it was onward and forward as usual, with the beginning of the school year and all the fall activities that come with it.

And in addition to our regular activities, we enrolled our oldest in the nearby community college for a dual credit course (three days a week) and my husband and both daughters signed up for a passion play (twice a weekend every weekend for about ten weeks.)

It was busy, and it was often stressful, but for the most part I avoided any more mental breakdowns, and that was good.

One of the results of the stress and anxiety of the year is that I have felt more scatterbrained, I’ve had trouble remembering things, and I’ve had a harder time focusing. I felt like my mental clarity slipped quite a bit and as a result, I’ve dropped the ball on things more easily.

I relied heavily all year long on my planner and my phone reminders to help me stay on top of things as best as I could. So while the fall semester was “breakdown free” it was not without its hiccups thanks to my underperforming brain.

The holidays are by far the busiest time of the year–at home, with family, at the church, everywhere. I’m not going to lie, I was nervous. I was worried about another breakdown. I survived largely because we took a huge holiday break from school. I also tried to avoid taking on too many things. Nevertheless, there were many activities, projects, and responsibilities. I survived, but I felt the strain on my brain and I struggled to avoid dropping balls.

So what have I learned from 2016? Surely there must be something good that has come from such a hard year?

–> I have learned a hard lesson about something I already knew — that I too often say yes, for a large variety of reasons, but I need to say no more often.

–> I have learned that my plate is only so big, and if you overload it, it cracks, and if you crack it, it might not be able to hold as much as before.

–> I have learned that a seemingly small thing can overload a full plate; it can be the thing that cracks the plate. (One extra errand in a day can set a chain of events into motion.)

–> I have learned – AGAIN – the wisdom of rests and breaks, the necessity of prayer, the essentiality of God’s Word.

–> I have been learning the art of prioritizing, and delegation, too.

–> I’ve been reminded that you might not always see what’s really going on in someone’s life. Another result of all the stress was an increase in anxiety. Social anxiety, panic attacks, and fear. I’ve felt less anxious lately, but I still feel prone to it. I’ve been less stressed lately, but it’s always one commitment or monkey wrench away. And I haven’t felt depressed lately, but Satan likes to bring that one around from time to time so I’m frequently dealing with it. Stress, anxiety, depression.. you can’t see these invisible struggles, and you never know what a person may be dealing with.

I’ve also been reminded that sometimes when you share these things with someone, you can help them feel like they are not alone.

And that’s one of the things that I’m hoping to accomplish by sharing this honest look at last year. Maybe you feel cracked, too. Or maybe you know someone who has been struggling and dropping a lot of balls and you don’t know why, and maybe they’ve got more going on than you can see.

I haven’t picked a word for this year like I usually do. I couldn’t even gather my thoughts on it, and the only words I could think of at first were things like “broken,” “fragile,” and “undone.” Those aren’t good words for the year, and I didn’t feel pressed to find one.

And as the days of January continued to turn by and I continued in my course of action for the new year, I began to pray for “healing,” for “restoration,” and to be “held.” And all of these do feel like good possible words for the new year. These are at least on the right track.

And while there’s nothing wrong with a good planner, a good schedule, or a good budget, this FROG in this pot has to stop and address the situation going on OUTSIDE the pot. All the controlling-the-situation-inside-the-pot in the world doesn’t address the problem. And I’ve been so busy rearranging my pot, you know? “Maybe a little more here, maybe a little less there.” And I feel increasingly under-the-pressure.

So I’m thinking that this year, I don’t *need* a focus word for my “pot,” you know? Maybe what I need this year is to rest in God more, to rely on God more, to be held by Him more, to yield to His grace, His healing, His restoration. Maybe I don’t need to ask God, “make me more this, or less that,” but simply to ask God to hold me and lead me through this process, asking HIM to turn down the heat and the pressure instead of trying to do it myself, and asking Him to then show me what I should or should not be rearranging, removing, or adding.

I am a cracked plate. A broken vessel. An overheated frog. <– Sometimes you just have to own up to the truth of your situation.

But by God’s grace, I’m going to be okay. I’m proceeding with caution in 2017. I don’t want to take on too much. And all the while, I’m just laying it all down at Jesus’ feet. Lead me, Lord.

“One of the results of the stress and anxiety of the year is that I have felt more scatterbrained, I’ve had trouble remembering things, and I’ve had a harder time focusing. I felt like my mental clarity slipped quite a bit and as a result, I’ve dropped the ball on things more easily.” This paragraph is the result of my 2016, too. Early 2016 was hard – my husband started having health problems in February. He had three trips to the hospital in March and early April (total of 15 days in the hospital) and was out of work until… Read more »

Oh my friend I have done that so many times! I’m very prone to taking on things that seem right, or are expected, only to become completely overwhelmed at the schedule I’ve set for myself. It was a hard year for me too, and although I’ve pared down I don’t see things slowing down just yet, because of our current family situation… but it will. And I’m not taking on lots of extra projects and I’ve even been saying no to “let’s go out and…” because I need down time, time at home with NOTHING to do! And prayer. So… Read more »

Thanks for sharing this. It’s so inspiring. Totally agree with this: “I have learned that my plate is only so big, and if you overload it, it cracks, and if you crack it, it might not be able to hold as much as before.”