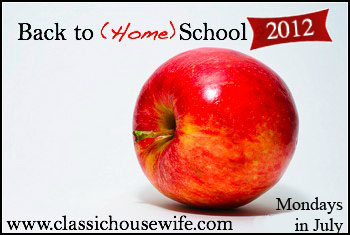 Summer is here and in full swing and we’re gearing up for a new school year. We’re finishing up “leftovers,” clearing off shelves, re-organizing and starting the process of gathering next year’s supplies. It’s a process that will take us at least a month or more.

Some of you are still doing school, some of you are already beginning the new year, some of you may be thoroughly enjoying your summer break. But with back to school season right around the corner for the public school system, there’s a good chance that most of you are starting to make plans and daydream as well. (Well, at least you moms.. your kids may or may not be.) ; )

Speaking of the kids, they’re the guest stars of today’s post. Each year I like to spend a few minutes thinking about how they’ve grown, their interests and strengths and weaknesses and how we need to proceed for the next year. Each year there’s so much that stays the same and so much that changes, it’s fun watching them grow. = )

Princess, Age 12, the Artsy One

My “little” Princess isn’t so little anymore! This year she’ll be moving on to either pre-algebra or algebra (we’ll see after she takes the placement tests) and general science– the beginning of the higher maths and sciences.  Right brained, visual, and artistic, she’s not really crazy about math but she has come a long way over the past year!

She still prefers artsy/crafty things and reading. She’s still learning how to sew and we didn’t get nearly enough of that in last year so we’re going to plan more sewing (and crocheting,) and more art, too. Princess is like a creative jumping bean, always bouncing from one thing to the next, “I want to sew, no, paint, no, crochet, no, draw.” (She gets that from me.) One of my challenges is to help her harness her creative energy and focus on one project and see it to completion.

I need to remember that she works well with a lot of structure, checklists and organization, and I need to help her develop those habits and give her those tools to succeed. (Another challenge since I’m not so great at it myself.) Maybe teaching her can help me learn, too.

Drama Queen is left brained but musical, likes math but not if it’s not challenging enough, is auditory and kinesthetic, is kind of competitive, and very talkative. Her biggest improvement last year was in reading and in handwriting — she’s come a long way! Being auditory, she spells things like she hears them and words don’t “look wrong” when spelled wrong so we’ll be spending plenty of time on spelling this year, for sure!

Six months ago, Drama Queen took up guitar, and she’s doing really well with it. We will definitely continue making time for guitar practice in our day, we just need to develop a habit of doing it *every* day. She likes to sing, too. I’ll help her with that as much as I can for now, perhaps at some point we will consider voice lessons.

Drama Queen’s short attention span and fidgety learning style really call for shorter lessons and frequent breaks. We have a semi-good routine right now, but I’ve been thinking about going back to a schedule we had once before in which I had more frequent, structured, breaks scheduled into the day. It would be good for all of them, not just her.

Little Prince is ALL. BOY. He has a hard time sitting still, he paces while he talks to you, but then he’ll sit down with a ball of playdough or a package of pipe cleaners and he’ll suddenly go still as he intently focuses on the project at hand. You can almost see the wheels in his brain turning sometimes! I’m convinced the pacing/talking is from his brain running a million miles an hour while he shares what’s on his mind – his body is racing as his mind is racing.

He is always questioning and pondering and examining. He loves science. He says he wants to be an inventor. Maybe he will be! He has a natural knack for math, and almost all of the math and reading he has learned so far has been through conversation. At the same time, if he sees it, he remembers it. I have a hard time figuring out if he’s more kinesthetic, auditory, or visual… he’s almost equally all three.

Because he’s so hands on and always moving, because sitting still makes it harder for him to think, and because he overflows with constant curiosity, school has looked very different for him than it did for the girls at this age. Honestly, school is almost at the point of “unschooling” for him. He can read quite a bit, but he doesn’t want to sit down and read out of a reader, an easy book, a workbook– nothing. So I’m not pushing him because I don’t want to push him away from reading. Handwriting is the same way. His interest in these things has increased lately, so my goal for the upcoming year is to challenge him, but not too much, give him freedom to learn and focus him as much as I can. Honestly, teaching him has reminded me to keep the fun in learning alive as much as possible.

Each passing year I feel more on top of things, and I have high hopes for the new year. I realized the other day that I began doing school with Princess somewhere around the end of 2002 or beginning of 2003. She was almost 3, her sister was on the way, and I knew that I needed to start adding some routine to our day if I was going to keep a handle on things with a newborn in the mix. She was eager to learn and do something so we sat down for 30 minutes a day doing alphabet and math related crafts.

I suppose there are plenty of things that I *have* figured out. Thing is, now that we’re moving out of the preschool phase, I have one moving into the junior high phase. These kids just won’t stop growing. =p So once we figure out one thing, we’ve got something else to learn. I guess that’s just how it goes. =)

Now it’s your turn to link up and tell me/us about your school, your students, and/or your goals for the new year!

(Reminder: It’s okay to link up posts you’ve already written for your own blog or someone else’s back to school carnival as long as it’s on topic. Thanks!) To find all the posts in this series, click here.

The ABC’s of Homeschooling ~ Supplies and To Do’s

Back to (Home) School: Our Students | Are We There Yet?

I love this idea. I so enjoy reading others homeschooling blogs and getting ideas! I also like to see that I am not the only one having good or bad days. It also brings a good feeling that I am doing the right thing.

My first link might not work and I am not sure how to delete it….so if there is a way to delete it you can. I put the wrong URL in….so not sure where it will take you. The second one goes right to the blog.

It’s okay, I took care of the bad link. No biggie!
I think we all need to know we’re not alone, and I know I always enjoy peeking into other’s school lives. Thanks for joining in!

Isn’t it amazing how God created our children to be so different! I love it!!

Amber
Reply to  Amy @ Are We There Yet?

It is! I’ve said, it’s amazing how we can get so many different combinations from only two sets of DNA. =)