And then there were none… A fish tale.

A year and a half ago, three children bought their first aquarium, with much glee and joy and silly fish-naming. The three children loved their betta fish and three zebra danios, and their relationship began with much adventure. 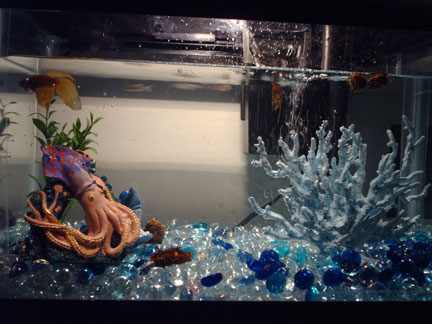 One of the three magic-lucky-disappearing-reappearing Danios did eventually pass on and the rest of the happy go lucky fish found new friends through one dwarf guarami, one aquatic frog, one sea snail and one male fancy guppy. They all got along swimmingly,… except for the frog who immediately.. CROAKED.

The sea snail quickly became the family favorite. He was so intriguing to watch as he quickly sped over ever tank decoration, to see the way his body folded around the molded shapes, to know that he was helping to keep the tank clean and make less work for Mommy. Alas, one day a few months later, the sail suddenly died without warning. … It was a sad day.

After some passing of time, about six months after their fish adventure began, the Mother took them back to the store to replace the frog, the snail, and another one of the Danios who disappeared from the tank one day. The Mother found it most odd that each of the small fish simply disappeared from the tank when their time was up, so much for fish floating belly up and all that.

The excited children returned home with MUCH glee, two fruit tetra and a fiddler crab! Oh they were so excited about the fiddler crab. Imagine their shock when their new fiddler crab, Mr. Crabs, seemed most inclined to climb the fake plants and try to catch the betta fish or fruit tetras as they swam by!! The children were much alarmed, but the Mom was quick on her feet as she removed the fiddler crab to a small bowl of water and quick with her fingers as she turned once again to The Mighty Google. “Tell me, great Google, will the fiddler crab eat my fish?” “Indeed he may,” replied the google “If they are small and not fast enough to stay away from him. Alas, you should also know, that fiddler crabs are not truly meant to live in freshwater aquariums.” And thus, Mr. Crabs embarked on his own journey, full of it’s own excitement and much educational science fun.

The fish lived happily together for a long time, and would have lived together much longer, if during the following Christmas while the family was away, the power had not gone out, and the fish had not suffered fatally from hypothermia. It was indeed a sad return from Christmas vacation, but the children held themselves together remarkably well (as by this point they indeed understood, such is the cycle of fish life.) Even so, there was one happy thought amongst the sadness for it seemed that once the heat was restored, the Danio had survived!

Once again the Mother returned to the store with her small children in tow. Once again they returned home with a betta fish and four fancy male guppies. Make that FIVE fancy male guppies! The store clerk AND the cashier AND the Mom had been fooled by two identical guppies in the plastic bag!! The family was nervous at first, for the danio did not seem to pleased to share his space. Soon, however, he accepted them and the fin-nipping ended. The children were happy to have found a good family of fish that would not eat each other!

Many months passed. The fish lived. The children began to bore. Apparently when the fish are living and there is no need to replace the fish there is no “new” to entertain. Still the mother liked the fish and wanted to keep them. As winter turned to spring and spring careened into summer, the weather grew hot and miserable, for the family lived in a land that was hot and miserable like the Sahara desert but not.

Perhaps it was the summer heat, perhaps it was simply their time to go. One by one the fish disappeared. The children hardly noticed. The mother watched them dwindle down at last to only just one.

That ever-lasting danio! The mother had surely gotten her two dollars worth out of that little fish. For the final week he swam alone, all alone in his five tank. Until one day.. he died.

And then there were none. The fish tank cycling water for fish that weren’t there. No one mourning his loss but the Mother. “Perhaps if we’d moved the tank to an air conditioned room, even though he’s a warm water fish? Perhaps if I’d been more diligent about adding fresh water as it evaporated more quickly in the summer heat? Perhaps, perhaps,… Perhaps he simply had lived as long as he could, after a year and a half of surviving a score of mis-adventures.”

“Will we get more fish?” The children asked?

“Perhaps one day,” the Mother replied. “Perhaps just a betta in large fish bowl.” The Mother likes the Bettas. 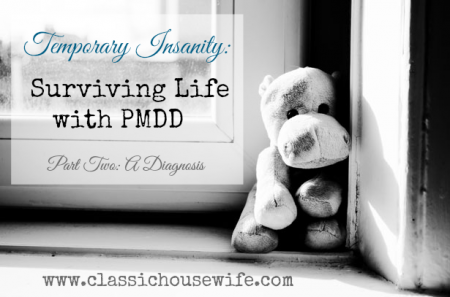