A Tale of Three Laundry Baskets

Once upon a time,…

there were three children who loved to do their own laundry. Or at the very least, they did not complain too much.

And their mother was VERY happy.

The oldest was very smart…

and was able to start the washing machine and dryer all by herself. She collected her laundry throughout the week in a laundry basket under her bed and every Tuesday she carefully checked her clothes, set aside things that needed to be treated for stains, turned socks right side out and made certain that she did not overpack the washing machine tub. She added laundry soap and started it all by herself. She also dried them in the dryer. She folded them carefully. And she put them all away.

And the mother was happy.

The middle child was very capable,…

but not quite tall enough to reach the knobs, or able to decipher the numbers and letters on them. Every Tuesday, when it was her turn, she would pull HER laundry basket (for it was labeled with her name) out from under her bed and take it to the washer. The older child would set the knobs for her and then the middle child would load her laundry in, nearly as carefully as the older child, but just as effectively. She would also dry them. And fold them. Or at the very least, they would end up in the correct dresser.

And the mother did not mind, because she did not have to wash them or dry them or fold them herself.

The youngest child was very enthusiastic…

and very much wanted to help and be able to do his own laundry like the bigger sisters. The oldest sister could start the washing machine for him, and he could bring his laundry hamper out of his closet, stand on a step and dump them in with much gusto and joy. The oldest sister would add the soap and the youngest child would be disappointed that there was not more laundry to throw into the machine. When the clothes were done, the middle child would stand on the step, pull clothes out of the washer and hand them to the younger brother to load into the dryer. She would help him with the dryer sheet and she would start the dryer (for she DID know that she was supposed to put that on “the six and the oh.”) The youngest son was not able to fold, so the mother would fold them and hand them to him in stacks and he would carry them to the drawers all by himself.

And the mother was happy, for she did not have to wash them or dry them, or carry them to the dresser.

And then misfortune struck,…

and the washing machine did not spin correctly. And there was water remaining in the laundry so that the tub needed to be loaded correctly, and the laundry needed to be wrung out before it was placed in the dryer.

And the mother was sad, for the children were not able to do this by themselves.

she replaced the bunk bed with two twin beds, one which had dresser drawers underneath and one which was a loveseat by day and a twin bed by night.

And there was no more “Under the Bed” for the two laundry baskets labeled with the mother’s favorite label maker. And alas, the two beds took up more space than the one, and though they searched for a place for the laundry baskets to go, none could be found. And also, the youngest child’s hamper broke and some say that it is because the youngest child was jumping on it – though surely he would never do a thing so reckless and destructive.

And the mother was sad, because the children’s dirty laundry could not be collected in their room any longer, and it mixed in with hers and made the pile in her room larger.

until one day when anther washing machine was acquired from a friend of the father and finally replaced the old one. But still the children did not have their own hampers nor places to keep them, so the mother was in a quandary. Still more time passed until one day she realized that the two older children’s bedroom furniture would fit better in the youngest child’s room – and vice versa. And at long last inspiration struck the young mother!

And she was happy, for she had found a better way.

And so the rooms were traded…

and indeed the furniture did fit better in both rooms, and also both dressers fit better in the closets and the mother saw that there was room for a small basket for each. And the mother was very excited! So the mother went quickly to the nearest Dollar General and acquired three small round laundry baskets, one for each child. She took them home and labeled them with her favorite label maker. And she placed each in the appropriate closet. And she saw that it was a very good thing!

And the mother knew that once again the children could collect and wash their own laundry – and she would not have to wash and dry and fold them herself.

And the mother was VERY happy indeed! 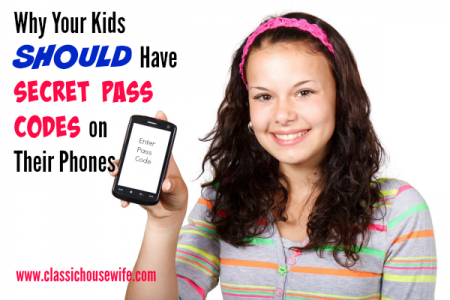 Why Your Kids SHOULD Have Secret Pass Codes on Their Phones

Teaching Kids To Be Responsible For Their Own Laundry

[…] use small “kid-sized” laundry baskets for hampers, the perfect size for one load of […]