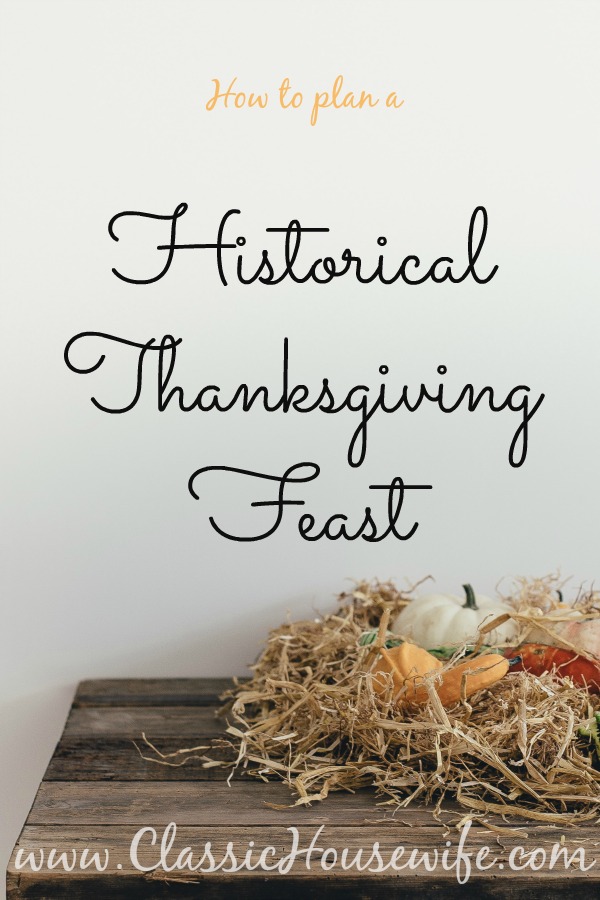 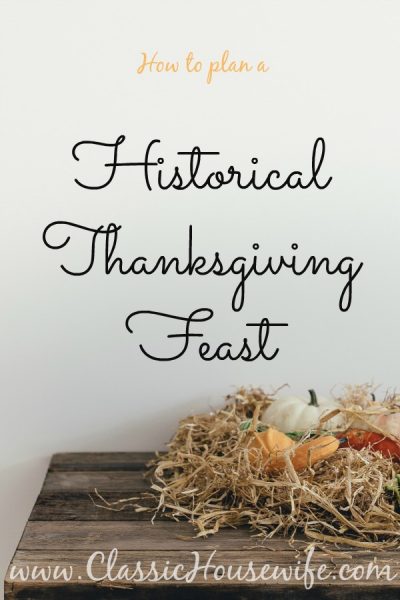 This year we are planning on preparing a historical Thanksgiving Feast. We aren’t learning about pilgrims in school right now, but that’s the way I run this school–I don’t like to miss opportunities to learn. 🙂

At any rate, we’ve been looking up information online and I’ve found this article on the History Channel’s website to be quite informative and helpful:

Oooh, this is going to be so much fun! No forks! 😀 Sorry, I got a little giddy for a second. Although, I must say that I’m gonna have to put a lot of thought into the menu since I don’t eat a lot of stuff on this list:

Foods That May Have Been on the Menu

What Was Not on the Menu
Surprisingly, the following foods, all considered staples of the modern Thanksgiving meal, didn’t appear on the pilgrims’s first feast table:

So, bearing that in mind… I’m willing to make two concessions. My husband would not be happy if there were no mashed potatoes or pumpkin pie. I’ll agree to make them, they’ll just stay in the kitchen and not on the table — “If you want them, they’re in there. ” 🙂 And I’m kind of disappointed there’s no ham or corn on the cob, but I can survive.

We’ll also wash our hands, eat with our fingers and probably drink sparkling grape juice or something like that. How’s that for a feast? Any tips or suggestions? I’m interested to hear if anyone else has done anything like this before.

Photo by Annie Spratt on Unsplash 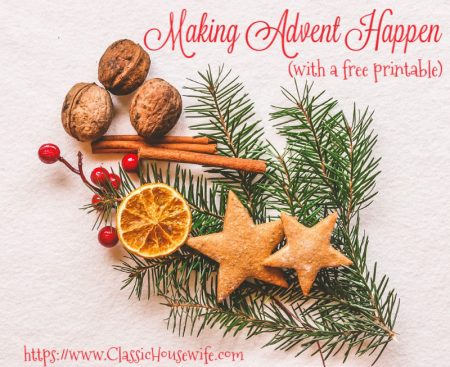 That is very cool that you are going to do a traditional menu and use that to teach your kids about the first Thanksgiving! I really like that idea, it sounds like so much fun!! Alicia gave Trevor and Zoe a “Thanksliving Treasure Chest” for their birthdays and it is so cool. I dont know if you have one of these or not (I am probably going to post about this), but it is put out by Family Life, and it is 6 devotionals leading up to Thanksgiving. It tells the whole story of the pilgrims and God’s hand and… Read more »

Is that the thing by Barbara Rainey, or no? I want Barbara Rainey’s Thanksgiving thing… can’t remember what it is called, tho… =)

Probably because Dennis and Barbara Rainey are two of the main Family Life ministry people.

I did a quick search and it looks like it is completely sold out right now. It is n/a on the familylife web site, and also n/a on amazon and ebay. I cant find any of them! But I looked on the box and it is made by Dennis Rainey of Family Life Today.

Yeah, I recall seeing that somewhere, but I don’t have one. I’ll have to get one for next year. (Although, looking for it, I can’t find it for sale anywhere…)

That’s a really great idea. We go to my husband’s parent’s house for Thanksgiving, but maybe we will try this some year.

This sounds fantastic!!! I’m so impressed – what a great way to teach your kids about history.

I think I need to read more about the Well Trained Mind. I’ve been seeing it a lot in the blogging community.

Thanks for stopping by my site!