And cut! That’s a wrap! January is over and gone and February is here. I can’t believe how quickly January sped by, I really can’t. Look how far we’ve come in only a month.

My predictions were right, unfortunately, and everyone at the Oliver house is still ill and down for the count. Hubby even has it now, too. I’m really sad that I had to sit out the entire last week of the fitness challenge. The number one goal was building a habit and every day that passes by without that habit is a crack in the wall. Ugh! The good news is that today I feel better than I have in many days, I think I’m on the other side of the hill headed up. This cold has totally sapped all my energy but today I felt a little more energetic and I hope that tomorrow or the next day I can feel up to eeking out a workout. I know that if I get back into that it will help me feel more energized.

Even so, I still accomplished SO. MUCH. this month.

I saw so much improvement in my energy and stamina throughout the day because of exercising and eating right. I felt SO. GOOD. And I know that now. And I see that. And I want that. So even though this challenge is over I need to, I WILL, continue working out and weighing in every Friday to measure my improvements.

I saw my muscles grow stronger as I had to increase the size of handweights and dig deeper into the exercises to get the same burn as at the beginning. I look at those two pound weights that I haven’t quite mastered yet and I think, “that’s a joke. I’m exercising with two pound weights.” And I want to see that number go up to 3. And 5. And 10. And so on. And I have to keep exercising and building muscle strength to see those weights get bigger and bigger.

I’ve lost weight – not nearly as much as I’d hoped, but I got the ball rolling and I’ve learned that to lose a lot of weight I’m going to have to push myself farther and harder than I’d realized. I’ve lost six pounds this month. And I’m happy about that. But I want to see that number go up and up and watch the scale go down and down. I want to be able to feel more comfortable in my skin and feel more able to keep up with my kiddos when we play outside. I want to feel more attractive to my husband and not get so frustrated when I shop for clothes. I’ve realized that I’m going to have be more diligent and committed than what I’ve been in the past if that’s going to happen. It’s not going to happen by itself.

I’ve increased our healthy eating here around the house and cranked it up another notch above and beyond what it was. We already ate a lot of healthy things but we also ate a lot of unhealthy things. The kids and I would eat at Sonic at least once, or maybe twice a week. I think we ate at Sonic twice in the whole month of January. (And I didn’t get a soda either time.) We’d also order pizza one night during 3 out of every four weeks, and we only ordered twice in January. On the other hand we also joined a local organic produce co-op which increased our amount of fresh veggies in the house by a huge amount, and we swapped out of our other normal snack foods and grocery items for some healthier options. Clearly we have a little farther to go, but one step at a time, we’ll get there.

I also want to say a quick thanks – thanks for getting this going and doing this with me. I really enjoyed it. You gals rock for joining in on something you didn’t have to do because my husband challenged me to do it. Thanks, ladies! 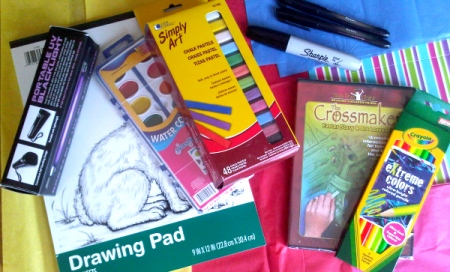 Thanks for sharing this! I’m really bummed for you that you had to sit out the last week because of the crud, but those things happen. At least we know that you would have exercised if you could!
.-= Rachel´s last blog ..Unconscious Mutterings =-.