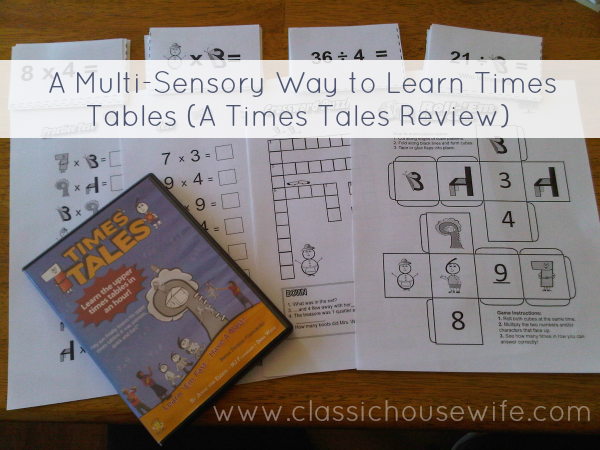 Yesterday I shared our favorite math curriculum, now let me share one of our favorite supplemental math products: Times Tales. Something about trying to learn Times Tables is daunting and frustrating for both parent and child. Perhaps it is simply because there is so much to remember. Perhaps it’s because the most common way to learn the Multiplication Table is through reciting – which is great for kids who primarily learn through auditory means but is frustrating for others. Whichever the case, many kids struggle with remembering and recalling multiplication facts.

So what is Times Tales? Times Tales is a unique approach to learning the upper times tables by Trigger Memory Systems in which a little one or two sentence “tale” is told for each multiplication pair (for sixes and above.) Each numeral is given a character, such as Mrs. Snowman for the numeral “8” because, well, it looks like a snowman. The two characters in each tale represent the multiplicand and multipier, and the number of items in the tale represent the product for each pair. It sounds simple if you’re a right brained person (and possibly confusing if you’re an analytical lefty) but it makes sense to kids and they love it.

While watching and repeating these simple tales, the kids drill the stories, and then the multiplication facts, and then taking it a step farther, practice the division facts, too! The kids enjoy it, it doesn’t FEEL like math practice, and it’s simple enough that my seven year old is picking up on it, too. 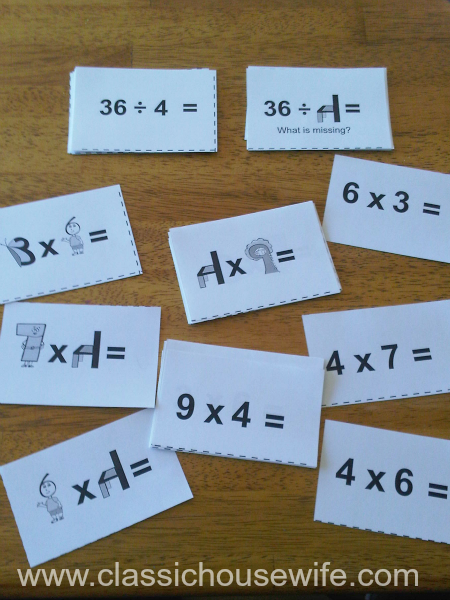 Inside the Times Tales DVD

The Times Tales DVD set comes with two discs that have everything you’re going to need. The video disc contains the teaching, practicing and quizzing of the tales, multiplication pairs and division pairs. It is divided into two halves for the kids to learn and practice half of the upper times table and then learn and practice the rest. The second DVD contains a variety of printables for further practice and quizzing.

As I mentioned, this only covers the upper times tables. That means 5’s and down are not covered. If I had any complaint at all about Times Tales, which I don’t really, it would my brain wishes there were stories for the lower numbers as well, because they’re so fun. However, the lower numbers are a bit easier to pick up on and kids don’t really seem to struggle too much, after they grasp the initial concept of multiples, until they get to the higher numbers. Once your child has grasped the lower times tables, Times Tales can be used to teach the higher numbers in a really fun and easy way. 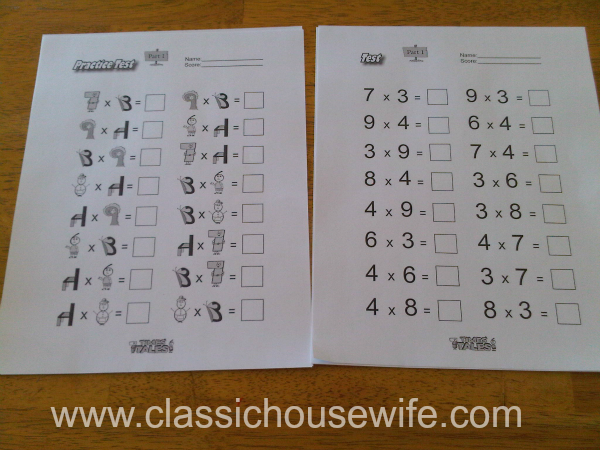 A Closer Look at the Times Tales Printables

In addition to the worksheets and quizzes you’ll also find a couple of fun activities – a crossword puzzle and a dice game. The cut-out dice are really fun! 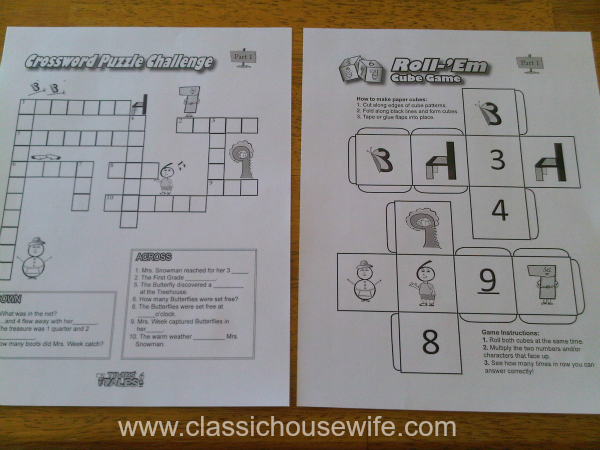 Obviously, Times Tales isn’t an entire math curriculum in itself, so when do you work it in for some supplemental practice? At this point, Princess knows her facts pretty well but she’s never been very “quick on the draw” so to speak. Drama Queen knows her facts fairly well, also, but after a long school break will regress a little. When we come back from a break, or when we have one of those “I suddenly forgot all my multiplication facts” days, we pull it out. We either run through it a little bit before completing our normal math, or, depending on what kind of math day we’re having, we might only focus on the Times Tales for the day. I usually have the kids practice it together as a group so that Princess can practice her recall speed, Drama Queen can get comfortable with her facts, and Little Prince can have fun learning, too. 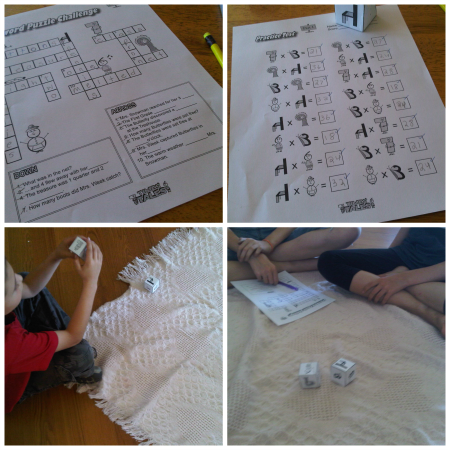 **I received compensation for this review but that isn’t going to sway our opinion about Times Tales. We’ve loved it ever since a friend said “You need this!” and sent it to us in the mail! A big thanks to Trigger Memory Systems who gave away a copy of Times Tales to one of my readers. Read more about my Disclosure Statement and my Review Policy. You can find Trigger Memory Systems on Facebook, Twitter and their website. 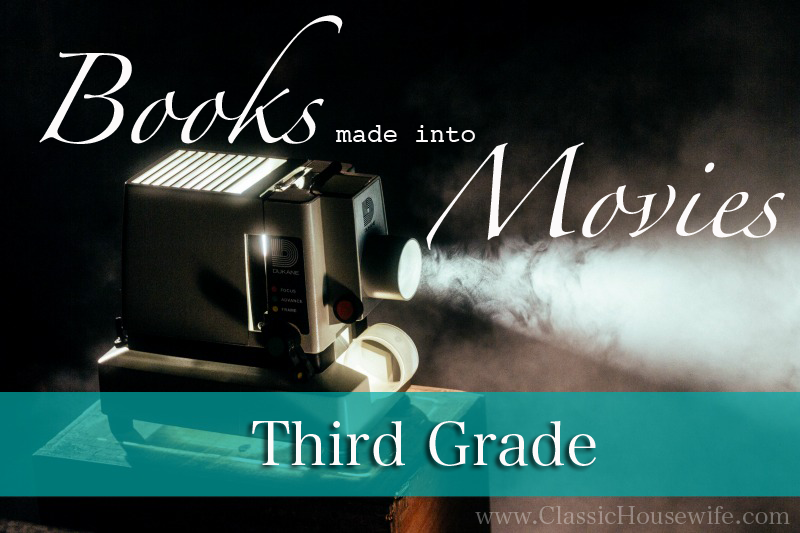 Hmmm that looks familiar. 😉 I’m so glad that it worked well for you!

This looks really cool! I wonder if I can use it alongside of Singapore Math?

I have not tried Horizons Math. Math has never been my favorite subject. It makes me nervous just thinking about it. I want to teach my children well and to love Math. This program looks like it would help!

Would love to try this for my 2 older kiddos!

It’s hard for me to find the time to do hands on math activities in which I know my little one would enjoy more! I need to be more organized!

Would love to win this

Looks great….would love to try it. 🙂

We’ve tried Horizons math in the past but it seemed to move too quickly and be a bit too advanced for a child with dyscalculia.

Just what I’ve been looking for! Why have I never heard of this? My son struggles with math but I really believe that this will work for him!

My biggest problem is getting his attention and holding it, you know keeping him interested long enough to like and learn! I want to try this DVD to see if it interests him. I hope so! I have not used Horizons Math before.

It’s hard for me to find math that keeps my oldest son focused/interested.

My biggest challenge is keeping it hands on and balancing several children’s math curriculums.

We haven’t ever used their products. We would love to win the Times Tales DVD!!! PLEEEEASE. My daughter is seriously begging me to teach her multiplication. DVD based curricula works for my daughter. She is very attentive and I believe the stories will capture her attention even more. I have done a few hands-on activities but will begin studying multiplication thoroughly in June after the move. We school year round. She knows the lower times tables, but struggles with the upper times tables. This would be the “perfect” supplemental solution. I have been eyeing this product for quite some time… Read more »

Math is challenging in every aspect. Doing flashcards has been a chore. I need a new approach!!!

I get frustrated at my kids too easily in Math. Probably because I aced it in school so it’s hard for me to have someone not understand it right away.

to me, math has always been drudgery. I’m afraid it shows in my teaching style and attitude way too often.
I’m definitely taking a close look at this program – it might make a great summer school acitivity!

My kids need this!

My 11yo daughter is having such a hard time memorizing the multiplication facts, and I have wanted to try Times Tales for a long time!

What a GREAT way to teach the times tables! Why didn’t they have this around when I was learning them? I can see this being a quick and effective (and memorable) way to learn.

A challenge to teaching math is staying on top of what my kids are learning, so I can quickly help them as they need it.

My dd has LD’s from Epilepsy. Math is our biggest challenge. I feel like pulling my hair out every time we do math. Learning the facts has been a nightmare. She tries so hard bu no matter how much we drill with flashcards, she never seems to grasp them 🙁 I did get a chance to see Times Tales in action at a friends house once and it was incredible! The kids were engaged the entire time & enjoyed learning their facts. If money were not an issue, I would buy it in a snap! Thanks for hosting the giveaway.… Read more »

We have not used Horizons Math, but I have heard great things about Times Tales and would love to win it!

We use Horizons right now. This DVD looks like a great addition!

I’ve used Horizons Math for my two daughters from kindergarten to 5th grade. I’d love to win Times Tales as a supplement!

I used Horizon’s math for kindergarten.

I’ve heard of Times Tales, but never used it. It looks like something my daughter would enjoy though.

This looks like an awesome way to teach my son the times tables!!
Would love to win this!

biggest challenge is transferring my mathematical enthusiasm ….
they would rather go read a book or four

We DESPERATELY need a way to memorize multiplication – it has been a 2 year stuggle with my 10 year old!

It seems interesting, but I wonder how it compares to Singapore Math.

We use tons of different approaches to try to get math facts to stick! We use flash cards, games and file folders!

This looks like a great addition to our math program. I think this would match my daughters learning style.

I try to use hands on activities as much as possible but I also use flashcards, pintables, and get a lot of ideas from pinterest!

My son is five and we did some skip counting songs last year to start him off. I think he would enjoy a program like this. Thanks for the opportunity to win it!

We use flash cards, cds, and games to teach math. Thank you!

I use worksheets, manipulatives, workbooks, chalkboard to teach teach multiplication

Oh this looks intriguing. My oldest is really struggling to master these. We’ve tried online drills, marching, building them with blocks, etc…

We use flashcards, computer based games and old fashioned drill.

Currently, I just go through a workbook with my son when teaching math. I always forget about the flash cards and manipulatives that we have hanging around.